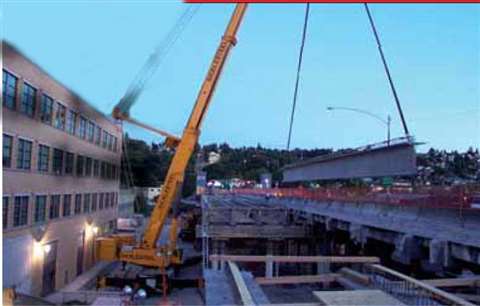 While the revised federal requirement for crane operators continues its administrative journey through the corridors of federal OSHA, attempts in the “other” Washington to implement a similar law came to fruition in early April.

Washington state Governor Chris Gregoire signed into law HB 2171 on April 10, 2007, and in doing so, made her state the 15th in the nation to require crane operators to be certified. Effective January 1, 2010, no employer or contractor may permit a crane operator engaged in construction work to operate a crane unless the crane operator is qualified. The new law also requires cranes to be certified at least annually by a certified crane inspector.

Washington's Department of Labor and Industries (L&I) has been given the responsibility of establishing the requirements for a qualified crane operator, but they must include, at a minimum, a provision for crane operators to have a valid certificate for the type of crane they operate. The certificate must be issued by a crane operator testing organization that is accredited by a nationally recognized accrediting agency. The National Commission for the Certification of Crane Operators (NCCCO) has been accredited by the National Commission for Certifying Agencies (NCCA) since 1998.

The new law also requires the accredited certifying organization to administer written and practical examinations and have procedures for the recertification of crane operators at least every five years. In addition to being certified, the new law also requires crane operators to have up to 2,000 hours of documented crane experience that meets experience levels to be established by L&I. There are provisions for an apprentice or trainee operator to operate cranes under the “direct and continuous supervision” of a qualified crane operator. They must also pass a substance abuse test conducted by a recognized laboratory service.

The enactment of the law, whose passage is one of the swiftest of its kind ever, comes less than five months after the fatal Bellevue, WA tower crane collapse in which a Microsoft attorney was killed in his condominium, and three buildings were damaged. The investigation into that accident, which sparked a state-wide inspection of tower cranes and resulted in a number being shut down, is continuing.