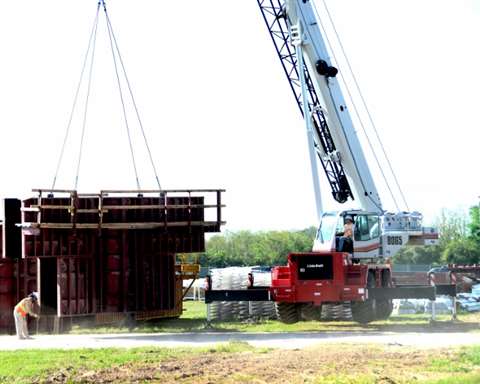 Construction is underway for the Texas Department of Transportation’s 184-mile Grand Parkway; a third beltway loop for the greater Houston, Texas area in Harris and Montgomery Counties.

In the Fall of 2012, a joint partnership was formed between Zachry Construction Corporation of San Antonio, TX and Odebrecht Organization of Salvador, Bahia, Brazil. The new company, Zachry-Odebrecht Parkway Builders (Zachry-Odebrecht), was awarded a $1.043 billion contract to complete a 38-mile section of the Grand Parkway in an aggressive thirty month build schedule.

To keep up with demand of the project, Zachry-Odebrecht purchased 20 Link-Belt cranes that include six RTC-8065 Series II 65-ton rough terrain cranes, eight RTC-8080 Series II 80-ton rough terrain cranes and six TCC-750 75-ton telescopic crawler cranes. Whether at storage yards for assembly, loading and unloading sub-structure bridge forms, or operating at the various interchanges and over-passes, the cranes are kept busy, at times all day and week, for sub-structure construction. These machines mobility and maneuverability, along with their ease of transport were the reasons for selection. At the end of the project over 120 bridges will be built in the 38-mile section.

Many of the picks performed by the Link-Belt machines are placing 15,000-pound flare cap forms from 35-to-50-feet radii. During the peak of operation, 1,500 employees work for Zachry-Odebrecht Parkway Builders on the construction project to maintain their aggressive schedule. One of Link-Belt’s Texas dealers, HOLT Crane & Equipment, will continue to support the contractor throughout the job.