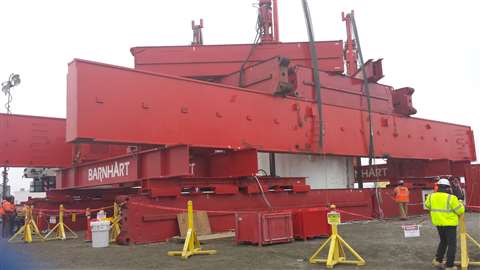 Barnhart logged more than 3,000 hours of engineering and 30,000 man hours developing a lift and transport system for the removal of a radioactive vault and reactor from Area 30 of the Washington Closu

The Rigging Job of the Year competition saluted four rigging projects that demonstrated how SC&RA members successfully meet professional challenges encountered in rigging. The focus of each of the winners was on ingenuity, hard word and a concern for safety:

Look for details about Job of the Year Winners in SC&RA’s official magazines, American Cranes & Transport and International Cranes and Specialized Transport.