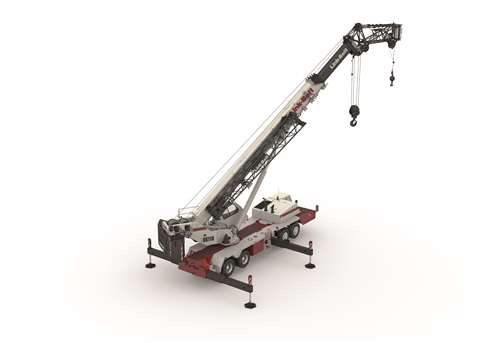 As a matter of fact, Link-Belt’s newest model, which has been in testing at Link-Belt’s Lexington, KY manufacturing facility since late spring, may actually take a bite out of the smaller class AT market.

“This is a long-lasting revenue producer,” he said.

With a capacity of 110 tons, the new HTC-86110 features a 38 to 164-foot, six-section pin and latch boom (greaseless) and a 10 to 35 to 58-foot three-piece onboard offsettable fly. It also features two 16-foot boom extensions plus a 58-foot offsettable fly with a total attachment length of 90 feet. The machine’s maximum tip height is 261.6 feet.

“The crane basically has three on-board attachments rolled into one,” said Curnutte. “The new fly pinning design focuses on quick and easy assembly and disassembly. The new telescopic fly pin installation, with cordless impact, replaces pounding pins and minimizes any work at height.”

This crane has a new wire rope guard that allows for one-handed operation. The bolt-on assembly offers ease of replacement in the event of damage.

The cab of the crane tilts from zero to 20 degrees. There’s a pull-out cab walk, large windows for a panoramic view and sliding right and rear windows. Heat and AC are standard, and it’s equipped with dual or single axis electronic controllers.

A camera package gives the operator looks at the winch and swing operations, a new operator aid feature, Curnutte said. Carrier cameras give the driver a view when backing up and when making a right turn.

“The Link-Belt Pulse telematics system has been an industry success story,” said Curnutte. “We are very proud of how simple this system is and yet it’s very sophisticated with unique Link-Belt crane data points that offer real owner value. And our owners decide who sees the data.”

Link-Belt has made strides in lighting packages for its cranes. The HTC-86110 has illuminated compartments and controls for night-time operation as well as a work light package for rigging the crane at night or in the early mornings. Remote controlled floodlights are available. The crane carrier features halogen daytime running headlights and LED signal lights. Also on the boom is a wind speed indictor. An aviation package is also available.

Voice-of-the-customer input focused on ease of maintenance in the design of this crane, Curnutte said. It has an aluminium hood with oversized doors and sound suppression, easy access to batteries, circuit breakers and fluid checks and a remote-mounted fuel and oil filter. There are four points of access to the carrier and stowable ladders and stepping points for ease and safety.

“We also were able to incorporate inventive places for stashing your stuff,” said Curnutte. “There are four lockable storage boxes.”

The chassis offers a comfortable ride, and has ABS brakes, he said.

Link-Belt was strategic in assessing the market for this unit.

“We think it will leach from the smaller AT market,” Curnutte said. “This crane hits the price points and it has the longer boom. It’s bullet proof and reliable.”

Curnutte said the first units will start shipping by the end of 2015.