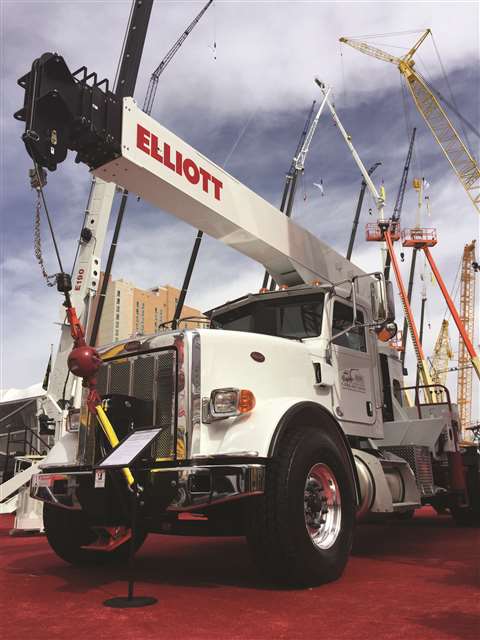 While boom trucks have long been a North American lifting industry staple, 2017 brings innovation and improvement to a time-honored machine.

Boom trucks serve in just about every industry and perform multiple tasks on a job site, according to Dan Brock, market manager for Altec Inc. Brock credited the oil price decline as the motivator behind the recent market jolt, forcing manufacturers to become more focused on product features and quality.

With high hopes for an improving market, ConExpo in March served as a platform for product reveals from all of the major manufacturers, including Altec, Elliott, Manitex, National and Terex. With the boom truck market on a slow rise, new models and features were a step in the right direction, according to the boom truck loyal.

“The biggest takeaway we experienced was the tremendous positivity and optimism in the American market,” said Jim Glazer, president and CEO of Elliott Equipment Company. “Many customers are very busy, and are actively looking for new solutions and strong manufacturing partners to boost their productivity and provide the high quality products their companies need.”

Similarly, Randy Robertson, director of sales and marketing at Manitex, said the boom truck market is “showing signs of recovery after a difficult 2016.”

“The market seems to be solidifying for boom trucks and has even begun to grow in some segments,” said Justin A. Pilgrim, global product director, boom trucks and carry deck cranes at Manitowoc Cranes. “Optimism is present in terms of a higher focus on infrastructure, large rental fleets that had once been stagnant are now mostly back to work, and we are fielding increasing requests for new products and special customizations – all of which are positive signals from our standpoint.”

Custom Truck & Equipment, a division of Utility 1 Source, inked a deal to add 75 National Crane boom trucks to its fleet. The Kansas City, MO-based company will primarily use the cranes in its rental fleet, which provides bare rentals to a variety of industries, including oil and gas, utility, construction, tree service and rail. The boom truck order is comprised of several models from across the National Crane range.

In the features category, boom trucks with dual-rated capabilities received a lot of attention at ConExpo. With traits of both a boom truck and an aerial platform, these machines are cost effective because they eliminate the need for two different machines.

“The AC40-152S, for example, is a 40-ton machine with 152 feet of boom,” said Brock. “This, combined with the 1,200 pounds of platform capacity at every boom position and jib-extension, affords best-in-class aerial operation for a unit of its type.”

“The North American market is the birthplace of the boom truck product and continues to be a strong market for this type of crane,” said Glazer. “Boom trucks continue to evolve with not only higher capacities, but also changes to hydraulic, electronic and structural designs with the goals of improving performance and operator comfort. We anticipate steady demand for boom trucks this year in North America, and increasing demand in certain areas.”

Elliott’s unveiled the 18-ton capacity 1881TM tractor-mounted boom truck with a new tilting crane cab. Glazer said the new model is “a reflection of our belief in the broad North American crane market, and our expectation that there are many opportunities for growth.”

Elliott’s principal focus is to continue investing in machine performance and quality, while making sure to manufacture the products that the market demands as regulations and work practices evolve, Glazer said.

Boom trucks serve as an important market segment for Terex, according to Dave Kuhlman, senior sales manager, major accounts team at Terex. Shown at ConExpo by Terex were the Crossover 8000 and the Crossover 4500L, both receiving strong interest.

“For the past several years the highest demand products have been in the larger 36-ton plus capacity models,” said Kuhlman. “However, recently we have seen an increase in demand for the smaller capacity class units 22.9-ton and under. This indicates that the market is beginning to grow in the segments that have been depressed for several years.”

The 45-ton capacity Crossover 4500L is equipped with a 129-foot fully synchronous telescopic boom, has a 136-foot maximum tip height and comes with a 32 to 49-foot optional jib. With the jib tip the Crossover 4500L has a maximum height of 183 feet. This model features an X-pattern front outrigger design which eliminates front jack requirement.

The largest boom truck in the Terex line, the Crossover 8000 has a rated capacity of 80 tons at 10 feet from the center of rotation. The crane features 126 feet of main boom and a cab that tilts 18 degrees.

The Crossover 8000 has a maximum tip height of 190 feet and a maximum boom length of 182 feet. The overall length of the crane is 48.5 feet. The crane cab features a heated seat, electronic joystick controls, standard A/C and flameless heat. It has a rated capacity indicator with work area definition.

National Crane showed off the new 55-ton NTC55, which the company termed a “truck crane replacement.”

Pilgrim said customers had expressed a need for a maneuverable, transportable 40-ton capacity truck crane that could also take on the jobs of higher capacity boom trucks that require a larger area for outrigger setup.

“The key to the NTC55’s versatility is its ability to setup with a reduced 20-foot outrigger span, such as with a traditional 40-ton truck crane,” he said. “Boom trucks with capacities of 40 tons and higher have become mainstays in the market, with many customers electing to move directly to these machines as opposed to smaller, more entry-level enclosed-cab machines.”

National is also focusing on dual rated cranes, offering its new NBT40-1 Series with an optional aerial package. There are three models in the series — the NBT36-1, the NBT40-1 and the NBT45-1.

The new dual-rated NBT40-1 Series is targeted to the utility sector, where energy work on de-energized power lines and new transmission infrastructure construction often require the use of both a crane and an aerial lift. The tree care, signage and millwright industries are also targeted.

Altec featured the AC45-127S, a 45-ton maximum capacity crane with 127 feet of full power boom. Built for the construction industry in mind, the crane was designed with a dual entry.

The Altec Dual Entry Cab comes standard and features a 20 degree tilt to improve the operator’s viewing spectrum while reducing neck strain and associated fatigue when handling loads at height.

The AC45-127S is configured with three position out-and-down outriggers as well as extended reach outriggers to reduce cribbing.  It features a 5-section boom and has a sheave height of 135 feet. The crane’s stowed travel height is 13 feet.

The ACT45-127S comes standard with the Altec LMAP (Load Moment and Area Protection) System and the Altec Opti-View Control System.

At Manitex, larger tonnage machines have been the most popular sellers over the past few years. However, today the company is seeing orders fairly evenly distributed across their range of boom trucks and truck-mounted cranes from 17 to 70 tons, Robertson said.

“Manitex is pleased to see the industry picking up and moving forward,” said Robertson. “[ConExpo] proves that as boom trucks continue to evolve, they are more widely accepted on bigger construction jobs doing more of the work and fitting more lift applications.”

“Attendees spent a lot of time in the seat sizing up our deluxe operator’s cabin,” he said.

The overall length of 25 feet from boom tip to fifth wheel makes the machine suited for the truss industry and other general construction applications, Robertson said.