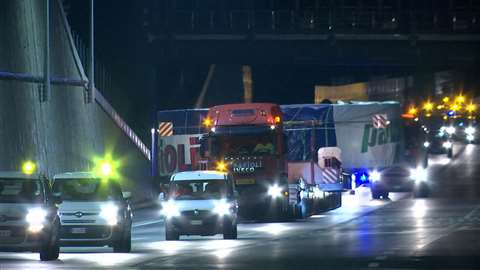 Fagioli spearheaded the door-to-door transport from Germany to Italy sections of the biggest tunnel boring machine (TBM) ever built in Europe. Assembled in Germany, the new titan among TBMs was named “Santa Lucia.” It has a diameter of 52 feet and will be used in the next three years to build the 4.6-mile Variante di Valico tunnel in the Apennines between Bologna and Florence, Italy.

The highlight of the haul was the massive cutting wheel with its fully assembled weight of 904,000 pounds.

The three largest items were moved by road in a convoy, with transport configurations ranging between 230 feet and 90 feet in length, 32 to 26-feet in width and between 1,200,000 pounds and 400,000 pounds gross weights. The route consisted of two provincial roads, and for the most part, the main Italian Highway “A1” that connects Northern to Southern Italy.

During the two months of preparation, Fagioli’s team surveyed and checked the route and organized the transport with the several local and national road authorities. This included the structural analysis of 96 bridges and the consequent load testing of two bridges. There was also the implementation of traffic control plans with the blocking of the road, the removal of more than 100 signs and lights and the development of contingency plans.

For the heaviest item, Fagioli designed and built side beams to interpose between the load and the platform trailer to equally spread the load among the 30 hydraulic axle lines.

The convoy was huge and included Fagioli technical support vehicles and numerous police cars. Association of National Roads Assistance and Autostrade per l’Italia (Highways For Italy) vehicles escorted the convoy with more than 100 people present during each of the two consecutive weekend nights of transport on public roads.

Fagioli prepared a detailed communication plan between the many parties. It included announcements and daily bulletins transmitted via mass media to notify participants about road closures and traffic reroutings.

The transport involved the biggest first sections of the tunnel boring machine, which when assembled, will have a final diameter of 52 feet and a total weight of about 4,800 tons or 10,600,000 pounds. The biggest section, called the drive with center plate, weighed 320 tons and had a diameter of about 29.53 feet.

For the transport of this section, Fagioli used a 30-axle line modular trailer pushed by two trucks, one positioned up front and one at the back of the 223-foot convoy. It took two nights to cover the mileage between Ravenna and Barberino di Mugello. To complete the whole operation Fagioli used a large fleet of trailers and semitrailers composed of 10, 12 and 16-axle lines.

Fagioli was in charge of the turnkey operation including the road transport in Germany executed by a local supplier; river barge transport onto the Rhine; chartering of a dedicated heavy-lift vessel to execute the sea transport from the North Sea into the Mediterranean and Adriatic Sea; in-house engineering documentation; and detailed plans in accordance with local authorities for the passage of the convoy between trailers and semitrailers. This impressive project was executed on schedule and without incident throughout the journey.