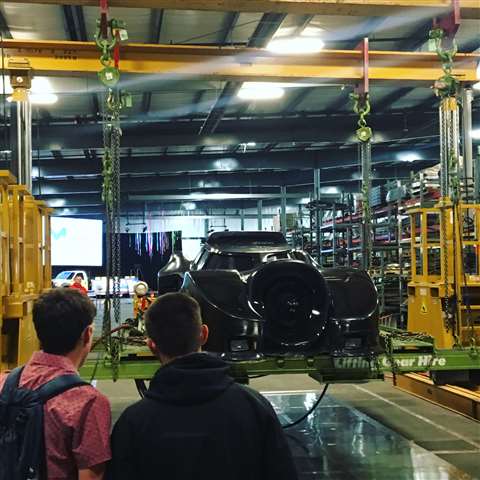 “Buildings weren’t constructed by a guy behind a desk.” This sentiment was echoed throughout the Lifting Gear Hire Lift & Move USA event Wednesday at the LGH headquarters in Bridgeview, IL. Serving as the host for the most recent Lift & Move USA event, 500 students filled the massive work space to visit a variety of informative and hands on stations.

An important industry initiative, Lift & Move sheds light on the detrimental labor shortage currently going on in the United States, and serves as an informative outlet for high schoolers who many not be considering a four-year college. Providing a variety of alternative career paths, these young adults, many for the first time, are exposed to different occupations within the industry.

“I got really interested in the crane working and the welding and mechanics,” said Lance Bus, a student at Batavia High School. “They showed us how to do it, and gave us the example of what we would be doing in that line of work.”

Bus later spoke about how the day’s event opened his eyes to some of the opportunities within the industry, and that there are many jobs that aren’t limited to hard labor.

“I think it widens your scope of understanding of how many jobs there are and how many facets there are,” said Edward P. Tucker, crew chief, Dearborn Companies. “It’s not just constructing and hard labor work. There’s a lot of math, physics, geometry…and all of that is very important.”

From cranes, SPMTs, gantries, trailers and virtual reality devices, millions of dollars of commodities were donated for the event. In addition, skilled tradesmen donated their time to try and reach out and interact with the kids in attendance.

Lifting Gear Hire brought in the infamous Batmobile, lifted with a Lift Systems 44A gantry. Josh Harris and Casey McManus, stars of Discovery Channel’s Deadliest Catch were also in attendance and spoke to the love of their job, and the importance of a strong work ethic.

The SC&RA, NCCCO, SkillsUSA, Barnhart, Imperial Crane, DICA, Union 136, Dearborn Companies, Local 150, ITI and many other organizations were in attendance, interacting with the high schoolers while donating their time, energy and resources.

“This was one cohesive unit,” said Pat Clark, national rental support manager for Lifting Gear Hire. “Everyone just came together as one team, despite maybe being competitors with one another. For five hours, these guys put down their swords and came together like super champs. I couldn’t be more proud. That’s what this industry is all about, it’s working together to get a mission accomplished.”

After a day of tremendous feedback, it was easy to see just how engaged many of the students were with what was said.

“If we could reach out to just a few of these kids, it’s a success,” said Clark. “But I had kid, after kid, after kid coming up to me and shaking my hand. That was something I did not expect and nor will ever forget.”

While today it may have only been 500 kids, Lift & Move USA is a platform that could very well solve the critical issue of labor shortage if this level of success continues.