Cranes crash down in Miami

Hurricane Irma has reached the shores of South Florida, causing damage to tower cranes in Miami.

As Hurricane Irma hit the shore of South Florida on Sunday, construction sites felt it’s effects in full-force. It has been reported that three cranes on separate projects in Miami have collapsed. Sunday morning, the first crane fell on top of a high-rise under construction at 300 Biscayne Boulevard, City of Miami officials tweeted.

The City of Miami tweeted out a warning to it’s residents in the area.

A second crane collapsed later that day and was dangling from an unfinished high rise on Northeast 30th Terrace, reported NBC Miami. Finally, a third crane collapsed in Fort Lauderdale around 5:00 p.m., near Auberge Beach Residences and Spa, an oceanfront condo complex, the Miami Herald reported. According to Fort Lauderdale police, a second crane on this site remained intact.

Fortunately, there have not been any injuries reported due to these collapses. Our thoughts are with all of those effected by this horrible disaster. To donate to Hurricane Irma relief efforts, click here. 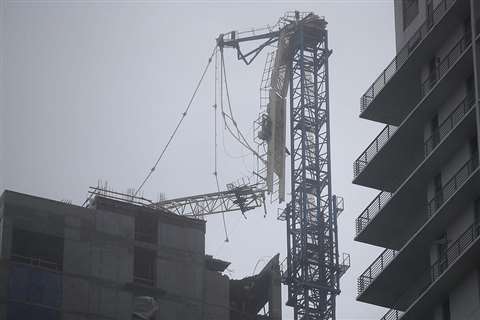