The first part of this award-winning SC&RA Job of the Year occurred between 2012 and 2014 when Fagioli transported and installed a number of 12,000-ton concrete caissons which were used as bases for the mobile barriers that isolate and protect the Venetian Lagoon from the Adriatic Sea when the tide reaches above established levels. 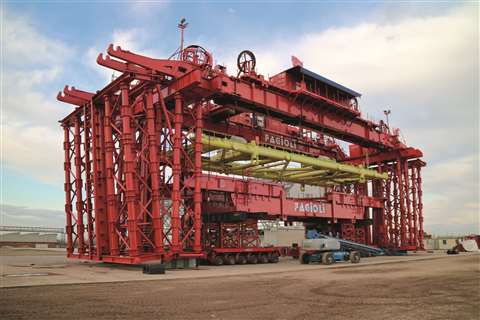 Between 2016 and 2017, Fagioli completed the award-winning second phase of this project: installing the 19 corresponding 450-ton mobile gates with a Fagioli-built customized launching system.

“After undergoing months of detailed analysis, tests and 3D simulations,” said Edoardo Ascione, president and managing director, “the Fagioli engineering department designed an innovative launching system to facilitate the installation of all 19 mobile gates. The launching system had a lifting capacity of 690 tons, a loading capacity of 870 tons and contained a movable tower system capable of rotating 180 degrees.”

First, Fagioli assembled the crosshead beam. Next, the towers were assembled. Fagioli then used SPMTs to mobilize the items and a 600-ton gantry lifting system to lift the structure. The crosshead beams were designed with four top-mounted, 300-ton strand jacks, which were used for the lowering/lifting operations of the mobile gates.

Next, Fagioli completed the assembly of the lateral movable towers. The towers were connected at the top and bottom

with two beams referred to as top and bottom frames. A middle frame was also used to allow the rotation of the towers. In order to execute the installation of the mobile gates, Fagioli built a dedicated lifting system called a “fishing beam.” 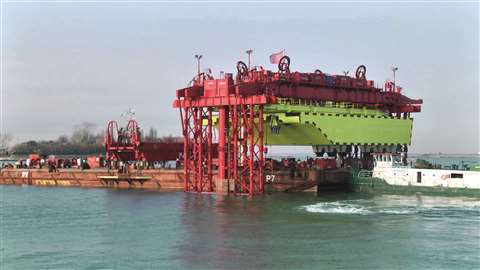 The “fishing beam” was gently lowered and connected to the gate. After connection, the gate was lifted by four strand jacks positioned on top of the lifting structure so the barge could sail out from under it.

This lifting device was connected to the strand jacking system, allowing the hooking of the gate for lowering it into its final position underwater.

During the project, Fagioli also custom built a structure they referred to as a “transport beam,” which was equipped with four 300-ton capacity strand jacks, as well as power packs for the skidding of the beams. The structure was designed to lift the gantry off one caisson and reposition it onto another caisson for subsequent gate installations.

In order to complete the entire operation as efficiently as possible, Fagioli employed a dedicated barge to transport the gates – with winches positioned on the barge for mooring operations. Fagioli was also in charge of the ballasting operations.

Once the barge carrying the launching system arrived at Malamocco, the gantry lifting system was placed in position over the first 12,000-ton caisson. The barge was moored and kept steady by tugboats. Once positioned, the gantry launching structure opened the movable tower systems.

The bottom towers were then joined together with the middle frame, and then the barge was unmoored and returned to Pellestrina Island where all the mobile gates were stored.

Using SPMTs, Fagioli then loaded the mobile gate onto the barge, after which it returned to Malamocco. The barge was moored underneath the launching system previously laid onto the caissons. The “fishing beam” was gently lowered and connected to the gate. After connection, the gate was lifted by four strand jacks positioned on top of the lifting structure so the barge could sail out from under it. The mobile gate was then lowered into the water by the strand jacks connected to the fishing beams. The final operation was connecting the gate to the caisson.

Due to their rigorous engineering and safety studies, Fagioli performed this extremely precise sea-based operation with zero accidents.