Has the tower crane market peaked? 2018 was a banner year for the market and 2019 doesn’t seem to be showing any stress. Economic indicators show a growing market for tower cranes but competition for customers is fierce. Several new tower crane players have entered the U.S. market over the past five years, some that are experiencing solid success. 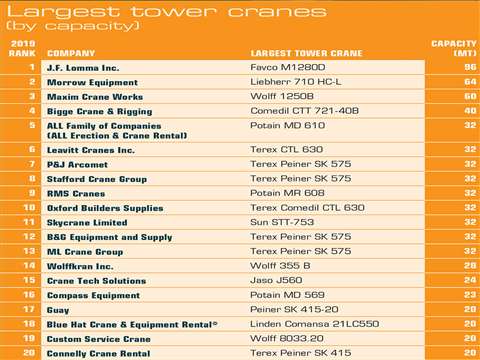 Last year’s list had 23 companies, 251 branches and 9,264 employees. So, it looks like companies are retrenching a bit, not hiring as rapidly or expanding as much as they did in 2018.

Morrow Equipment is the Number 1 company on our list. Morrow has been at the top of the list since the beginning. This year Morrow logged 568 tower cranes, some 98 fewer units than the 666 units it listed last year. The company shows 20 depots in 2019 and 341 employees. While Morrow’s numbers may be down a bit, this is likely a right sizing due to the market. Morrow remains firmly ensconced at the top of the list, rightfully owning the title as the largest tower crane-owning company in North America.

The Number 3 company on the list is Bigge Crane & Rigging, which continues to invest in its tower crane fleet. The company reported 210 units last year and 250 units this year, up 40 tower cranes.

The biggest surprise this year was the jump up by P&J Arcomet from Number 5 to Number 4, taking over the 4th spot held for years by the ALL Family of Companies. P&J Arcomet listed 93 tower cranes in its fleet last year and 107 this year.

Most companies on our list have increased the number of tower cranes in their fleets since this time last year. In terms of the largest cranes on the list, J.F. Lomma Inc. still has the largest capacity tower crane, the Favco M1280D, with a capacity of 96 metric tons.

As always, the ACT team made a monumental effort to increase the number of companies on the ACTTowerCrane50 top list. We created a database of close to 90 companies that we know have one or more tower cranes in their fleets. The problem is getting these companies to realize the value in filling out our survey form and submitting their information. As ever, we will continue to try to get this list to its rightful size of at least 50 companies.

The 2019 ACTTowerCrane50 shows that growth may be slowing in the tower crane sector, but the smart companies will be able to handle a decreasing market. Congratulations to those who made our list!