Imperial Crane Services rushed to the aid of a Chicago fire truck trapped in a parking garage.

It’s not everyday that an emergency vehicle needs someone to come to its rescue. 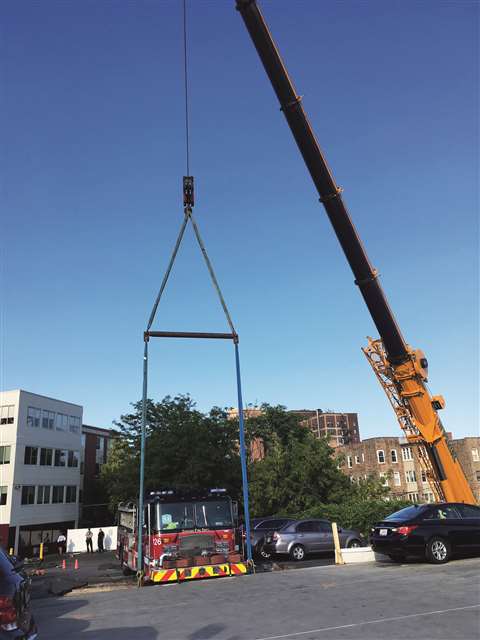 The front bumper was the only thing holding the fire truck in place. (Inset) With the firetruck having no lifting point, Imperial used a 20-ton capacity lifting beam rigged to the bumper.

But Imperial Crane Services was recruited for exactly that. On Tuesday, August 6, 2019, a Chicago fire truck engine became trapped in a second-story parking garage when the floor beneath the vehicle collapsed. The engine’s front bumper was the only thing holding the fire truck in place.

To begin the job, the Chicago Fire Department had to remove 500 gallons of water from the truck to ensure the floor wouldn’t collapse any further. But due to the engine’s remaining weight of 22,000 pounds, a crane was needed to lift the engine out of the hole.

With the fire truck having no lifting point, Imperial decided to use a 20-ton capacity lifting beam. In order to use this beam successfully, Imperial had to turn the beam upside down to be able to pick up the frame of the fire truck underneath while at the same time not crushing the nearby apparatus or the piping. To secure the beam underneath, a tow truck was brought in and Imperial’s crane was set up in a parking lot east of the parking garage.

Imperial utilized its Liebherr LTM 1200-5.1 that was rigged to a 60,000-pound capacity. The spreader beam was rigged to the crane and the fire truck. The lifting team managed to avoid hitting any of the sheet metal or incur roof damage during the lift. Due to weight of the crane, it could not be set up on top of the parking garage. Instead, it was set up on an adjacent parking lot at an 85-foot radius.

In just a few short hours, the team saved the City of Chicago $500,000 dollars by removing the engine that was then capable of driving to a repair shop for minor repairs.

From the time of the call to dispatch, the emergency lift was completed in a total of five hours. This also included implementing a lift plan and reviewing the required rigging equipment needed from Lifting Gear Hire (LGH). LGH was able to provide the rigging certification and beams needed in just 45 minutes. 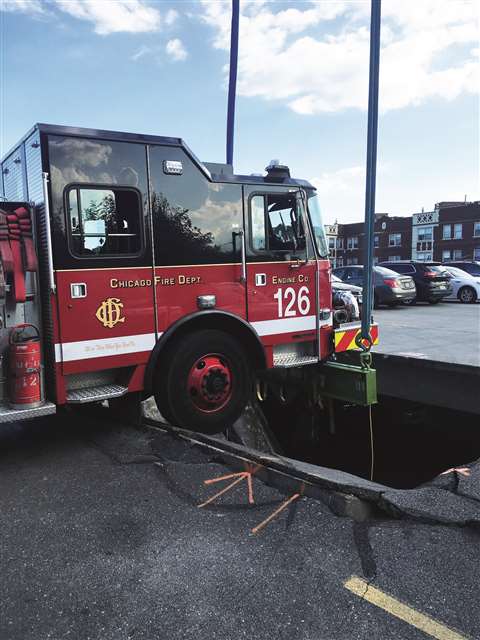 The front bumper was the only thing holding the fire truck in place.