Ceccanti, a Tacoma, WA-based construction company enlisted the help of a MLC300 crawler crane needed a crane to handle heavy loads at great heights to assist with the replacement of an old wooden bridge in Ridgefield, Washington. 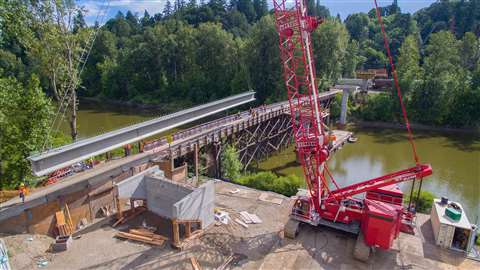 Positioned on a bulkhead on the shore of the river, the MLC300 has increased velocity at the job site, and now the project will complete five months ahead of schedule.

“We chose the MLC300 because of its superior capacity at radius and its maneuverability when compared to similar cranes in its range, and even larger cranes,” said Jake Brockmoller, project manager at Ceccanti. “This crawler crane’s radius allowed service of 75 percent of the job with help from the derrick barge. We would have certainly lost time and money if we had deployed other equipment.”

The work in Ridgefield started last February. Initially, the contractor had the job scheduled to take 14 months to complete, but now it is going to wrap up approximately five months ahead of schedule, in November. By then, the single-lane wooden bridge will be replaced by a two-lane concrete bridge that will pass over railroad tracks on the opposite riverbank.

Brockmoller explained that the MLC300 was positioned on a bulkhead built on the shore of the river. From there, the crane enabled Ceccanti to set shaft cages, position casings, place girders and all other construction support to take place without moving. The MLC300 lifted girders as heavy as 66.5-tons to heights of 65 feet and rebar cages as heavy as 61-tons to as high as 125 feet.