The heavy haul business in North America is never run-of-the-mill. While lashing a heavy component on a trailer and heading down the road may look simple, it is not. Beyond the route surveys, permits, regulatory approvals, equipment selection, rigging, safety assessment and tedious project engineering, there are hundreds of details that require expert attention along the way. 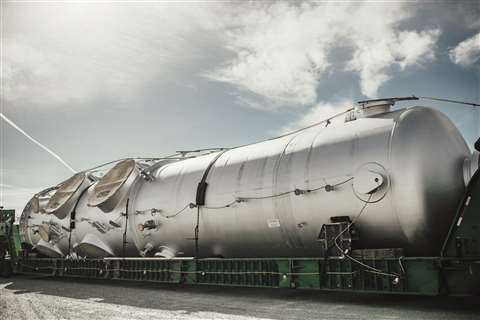 “There were several factors that contributed to the method they used to move the tank,” said Erik Zander, director of sales for Omega Morgan. “First, accommodations had to be made for the dozens of nozzles and accessories on the outside of the tank. These are crucial to the operation of the reformer, and if one of these were to be damaged, it would have been an expensive fix.”

Omega Morgan’s team assembled the trailer deck underneath the tank, then built the load saddles so that the nozzles would clear the rails.

Second, the tank was manufactured inside a warehouse, which limited the height of the moving equipment used. This meant cranes were not an option. And last, the pre-camber of the trailer deck rails created an obstacle for the nozzles on the vessel.

“When not under load, the trailer bows up by several feet in the middle, so that when it is bears weight, it becomes straight rather than sagging,” said Zander.

That meant that the load had to be lifted several feet higher to account for the difference. The Omega Morgan team found unique and effective solutions. They assembled the bowed trailer deck underneath the tank, then built the load saddles so that the nozzles would clear the rails. Using lift towers, they lifted the deck and the load. Now bearing the weight of the load, the deck of the trailer flattened out. The load was then lowered until the saddles sat on the deck rails and there was less than an inch of space between the nozzles and the top of the deck rail.

“This was a crucial step because it lowered the overall load height, and the route to Sparks included several bridges with low clearance,” Zander said.

After arriving at the destination, the team did the same process, only in reverse. The result was a clean and successful move, Zander said.

Late last summer, Sterett Heavy Hauling took on the project of disassembling, transporting and reassembling a Hitachi EX3600 mining excavator, two Hitachi EH1700 dump trucks and two Hitachi EH3500 dump trucks. To keep the mine running without interruption, the timeline was set at four weeks. The route was 60 miles from Boonville to Washington, IN. 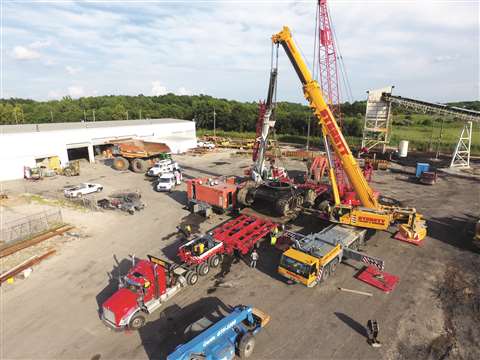 Sterett Heavy Hauling transported four dump trucks and a huge mining excavator to a mine in Washington, IN.

Unlike traditional hauling operations, Sterett Heavy Hauling approached the task with specialized equipment, keeping the excavator in larger pieces. The typical load count for a disassembled EX3600 is 13 loads.

But Sterett managed the move with five loads, getting the job completed in two weeks. The bottom and top half of the excavator were hauled in single pieces, while the racks and carbody were hauled on one load and the top engine with side compartments on the other.

The larger bottom half utilized eight lines of dual lane trailer, at 16-feet wide, and hauled the 22-foot wide load, grossing approximately 250,000 pounds. A push truck at the rear assisted with hills and loose terrain inside the mine site. Steerable axles on both the loads enabled the crews to safely navigate two roundabouts and multiple 90 degree turns. Keeping the excavator in larger pieces reduced the risk of mechanical failure and personnel injury, saving time and money.

Maxing out in Mexico

Tradelossa performed the transportation and rigging of gas components for the Jorge Luque Combined Cycle Power Plant. The components were hauled from the Port of Veracruz to Mexico City, the location of the power plant. 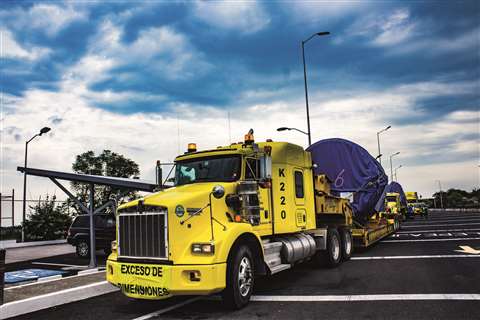 Tradelossa hauled various gas components, including a generator and a gas turbine, from the Port of Veracruz to a Mexico City Combined Cycle Power Plant.

The cargo encountered many obstacles including bad weather, roadway adequations and removing and relocating pedestrian bridges. The Tradelossa team worked with authorities in every town, following safety and quality standards. At the project site, Tradelossa’s team installed the two gas components and a gearbox with a gantry system, lifting them 4.40 meters above the ground. 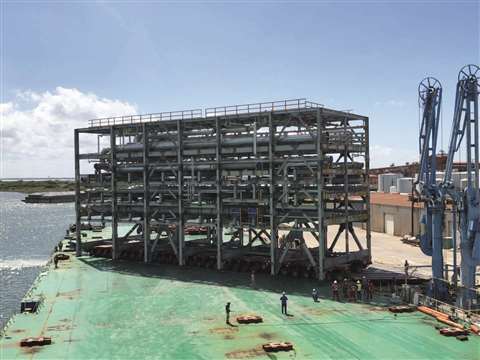 “The key factor that allowed us to overcome this arduous challenge was our team’s broad experience, creativity and determination to accomplish the goals set by our customer to deliver top-quality performance making this operation a complete success,” said Tradelossa’s Hainité Silva Páramo.

Last spring, B&G Crane Service, a division of Maxim Crane Works, provided heavy transport services for an expansion project in Point Comfort, TX. The scope of work consisted of offloading nine pipe rack modules that were assembled in Shanghai China. They were offloaded via RORO operations from the first ever self-propelled barge to enter U.S. waters. B&G Crane Service then transported the nine modules to the project site for performing stacking and retrofitting modifications.

Upon completion of stacking and retrofitting modifications, the remaining work scope consisted of onsite transportation and the setting of eight modules onto their foundations via self-propelled modular transporters.

Through the combined efforts and teamwork of B&G Crane Service, TXDOT, utility trucks, escorts and state police, the project was executed and completed safely and on schedule.

ML Crane Group company Crane Service Inc. has provided heavy lifting, heavy haul and alternative movement services to the wind industry in New Mexico and Texas for many years. Transporting and hoisting wind turbine components is an integral part of its business. 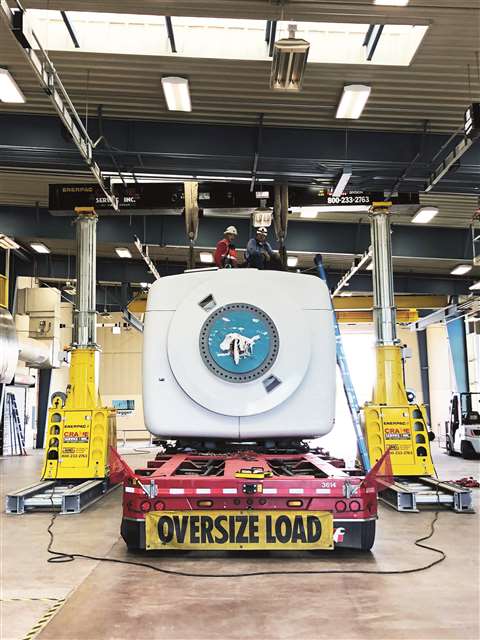 The Crane Service team lowered the Highway MAX and guided the nacelle into the training facility. The nacelle was positioned under an Enerpac gantry for offload and installation.

Recently, the Crane Service Amarillo branch and the Alternative Movement Division (AMD) teamed up to deliver a 136,000-pound nacelle to Mesalands Community College in Tucumcari, NM. What makes this project special is that the nacelle was not installed on a tower, but on the floor of the North American Wind Research and Training Center where it is a training tool for students in the Wind Energy Technology program.

The Crane Service team used its 9-axle Faymonville HighwayMax extendable trailer and 4-axle heavy haul tractor to transport the nacelle the 275 miles from Garden City, KS to the North American Wind Research and Training Center in Tucumcari, NM. The HighwayMax was the perfect transportation solution as it provided a nimble platform and narrow turning radius required to navigate the 235,000-pound gross load out of the congested storage facility and onto the road.

The chosen route to the training center consisted of multiple two-lane highways, each with elevation changes and height threshold issues. With its nine hydraulically steered pendular axles, each with a stroke of 23.6 inches, the HighwayMax was able to stay in lane and hydraulically lower the load when needed.

Upon arrival, the Crane Service team again lowered the Highway Max and guided the nacelle into the 12,385-square-foot training facility. The nacelle was positioned under a 500-ton Enerpac gantry for offload and installation. 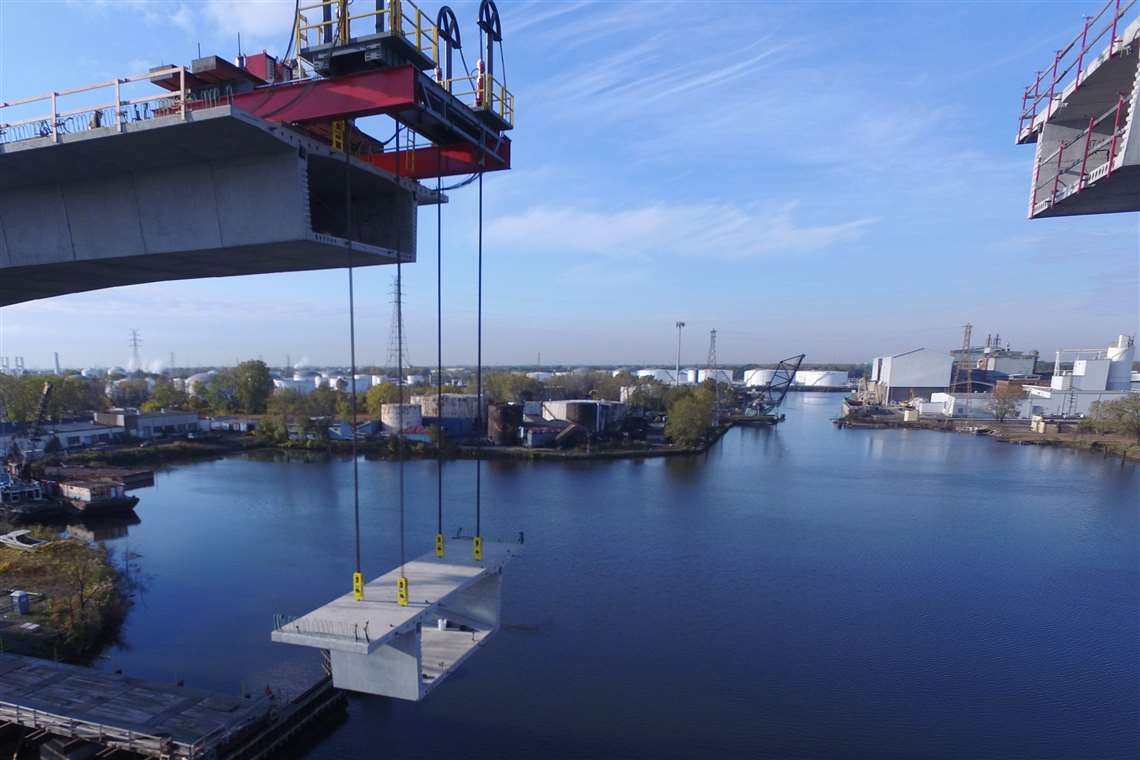 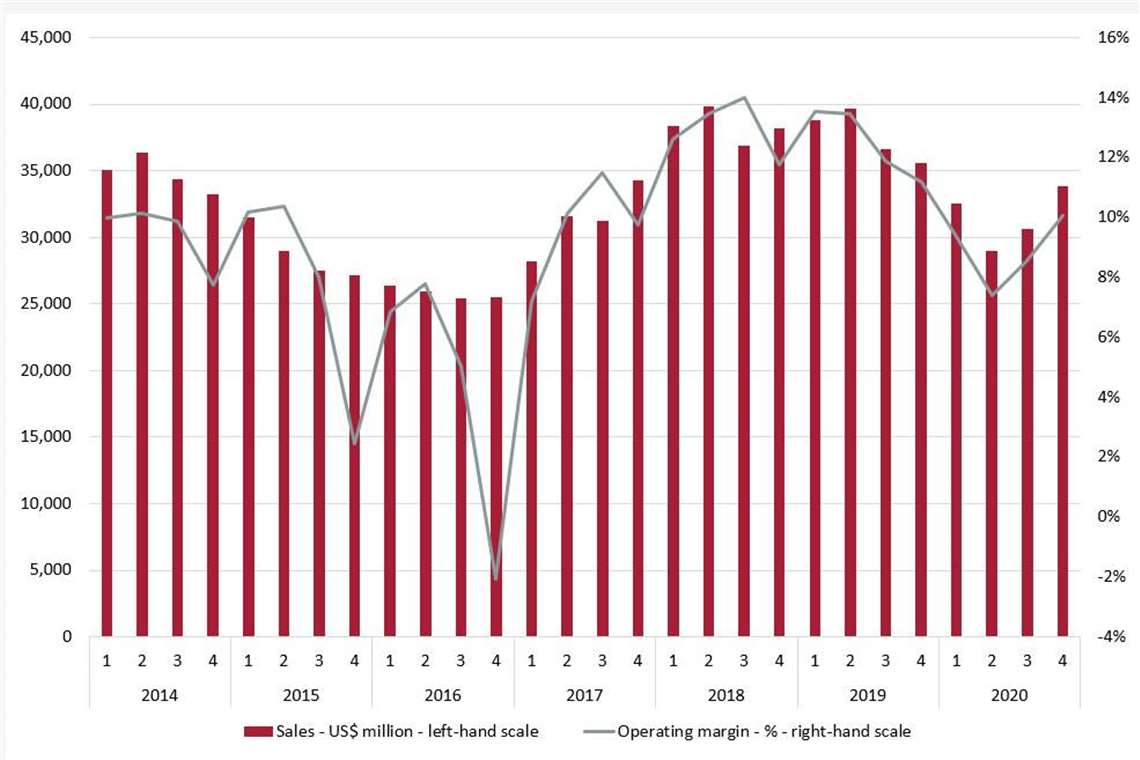