Greiner Industries used its Demag AC 500 to remove an historic bridge that was heavy and rickety.

Greiner Industries recently performed a tricky job removing a 190-foot (58 meter) long wooden bridge. The 100,000-pound (45 metric ton) bridge, which was more than 150 years old and very rickety, needed to be removed and set on a causeway for dismantling. The challenges were the length of the bridge, determining the center of gravity and tight site conditions. 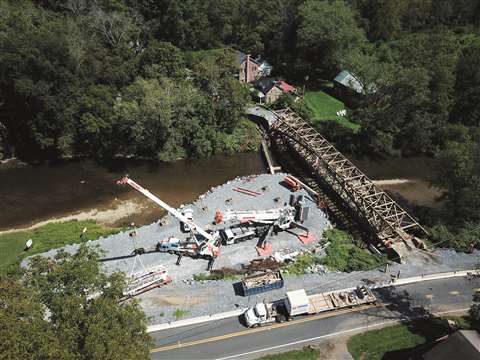 “The site was very tight,” said Dan Haulman, crane division manager for Greiner Industries. “The first challenge was to get our 600-ton Demag AC 500 with super lift and 75-ton Link Belt truck crane on the jobsite at the same time. The access road was very unlevel and created difficulty setting up both cranes.” 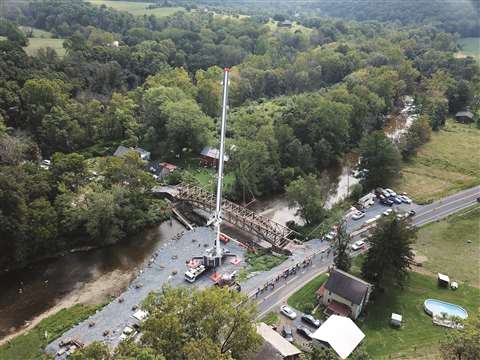 Prior to the bridge lift, a house moving company came in and raised the bridge off its foundation.

The Greiner team rigged the Demag all terrain crane with 352,000 pounds of counterweight. The Link-Belt 8675 truck crane was used to help rig the larger crane.

There was a concern that the old bridge wouldn’t stay intact throughout the lift, Haulman explained. Before the bridge was lifted by the crane, a house moving company came in and raised the bridge off its foundation. For further safety, bracings were used to strengthen the bridge structure.

Based in Mount Joy, PA, Greiner Industries’ Crane Division has a fleet of 11 cranes. The company acquired its AC 500 to compete in the bridge market, Haulman said. Greiner purchased the crane from Empire Crane based in Syracuse, NY.

“We chose this crane because of its fantastic chart and the ease of setting the machine up in tight spaces,” Haulman said.

When restored, Greiner’s team will set new steel I-beams in place and install the re-engineered bridge back in place.