In a 55-hour timespan, an overpass on the Pennsylvania Turnpike was removed, replaced and reopened.

Wolfe House Movers had its self-propelled Buckingham Dolly Systems assembled and in place to receive each of the old bridge sections as they were removed by a 300-ton capacity Liebherr LR 1300 SX crawler crane.

If there is one thing everyone would like less of in their lives, it’s sitting in traffic caused by ongoing road construction. Enter Accelerated Bridge Construction, also known as ABC. This bridge-building technique reduces traffic delays that could have disrupted traffic for months, if not years.

But the process for ABC requires specialized equipment and highly experienced rigging and transport crews. It requires expert engineering and turnaround times that seem unbelievable.

Such is the case with the Pennsylvania Turnpike overpass at PA-309 in Allentown. General contractor JD Eckman has many years’ experience coordinating ABC projects. In preparation for this project, Eckman’s crews fabricated new bridge sections at a construction lot several hundred yards down the road and built the new concrete abutments under the existing bridge sections.

When the time came, the turnpike was shut down on a Friday evening and the flurry of work began. The process of removing the old bridge and moving the new bridge sections into place spanned 55 hours. Buckingham Transport/Wolfe House Movers had its self-propelled Buckingham Dolly Systems assembled and in place to receive each of the old bridge sections as they were removed by a 300-ton capacity Liebherr LR 1300 SX crawler crane. The 8-axle dual-lane dolly transporters feature four independent dollies that are self-propelled. They are remote controlled, which allows the transporters to be highly maneuverable compared to alternative methods. The old bridge sections were then hauled down the road to a construction site where they would be demolished and hauled away at a later date.

The use of radio remote control technology allows the machinery operator an unparalleled view of all operations, resulting in a safer working environment.

The hydraulically powered dollies are designed to maneuver easily over rough terrain, making them the instrument of choice for heavy component and machinery relocation on a jobsite, according to the Wolfe team.

Wolfe’s machinery moving methods are especially well suited to sites where vertical clearance is an issue. All of Wolfe’s hydraulic moving dollies incorporate a 16-inch hydraulic lifting cylinder, which allows the load to be transported with a minimum of vertical clearance.

As soon as the last old bridge section was removed, the new 280,000-pound bridge sections, which had been loaded onto additional self-propelled Buckingham Dolly Systems, were transported from the construction lot to the site for the crane to lift them onto their new abutments. Each of the four bridge sections were 94 feet long and 16 feet wide. They were made of reinforced concrete and steel. Once the new bridge sections were in place, the transitions to the roadways were paved. The turnpike was opened to traffic early Monday morning. 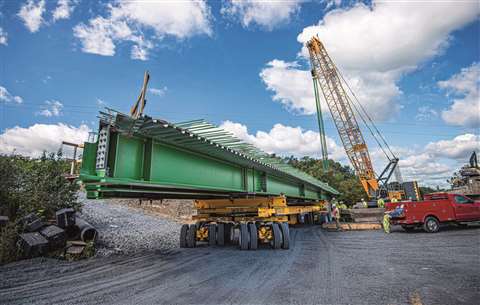 Made of reinforced concrete and steel, each of the four bridge sections were 94 feet long and 16 feet wide.

“The safety of infrastructure across the United States and the whole idea of replacing old bridges has been a hot topic of discussion over the last few years,” according to Andre Siegrist, marketing coordinator, Wolfe House Movers, based in Bernville, PA.

“On average, bridges are expected to last approximately 50 years, and with the NB #360 bridge dating back 62 years, it was time for a replacement,” said Siegrist. “According to American Road & Transportation Builders Association, Pennsylvania has the fifth most structurally deficient bridges in the United States, with 16.5 percent needing replacement.”

The 94-foot long NB #360 opened in 1957 and has since carried almost 30,000 vehicles a day. Crunch the numbers and when you compare it to a traditional 6 or 7-month timeline to replace a bridge, you can realize the staggering amount of vehicles that would have been affected by traffic delays. The impact of this process can be seen, not only in the traffic flow, but also in the lower energy costs and the reduction of risk to the construction workers and general public.