Installation of a huge combination tower at a refinery in Beaumont, TX required expert planning and execution by the team at Deep South Crane & Rigging. 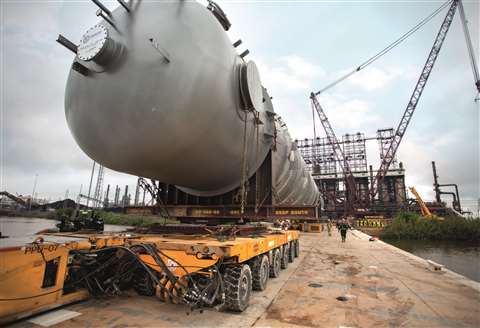 Petrochemical plants require constant oversight and new equipment, which is why the Deep South team stands available when a need arises. Often these jobs are planned years in advance so that the equipment needed can be fabricated.

For a refinery job in Beaumont, TX, Deep South provided turnkey services including heavy haul, barging and logistics as well as heavy lift and rigging. The company also performed all the necessary lift planning and engineering work.

“We transported the tower over the road at a height of 25 feet and an overall length of 242 feet,” Warshaw said.

The route from Cheek, TX to Port Arthur, TX was about 43 miles. Once in Port Arthur, the tower was transloaded using gantries and secured to SPMT transporters. 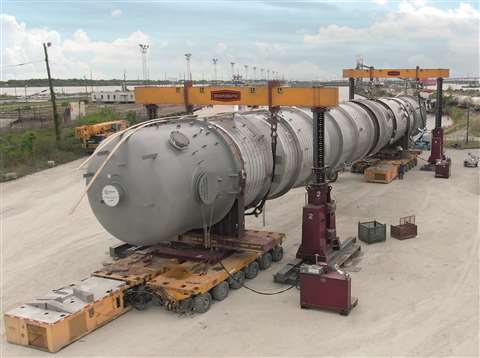 “Due to a number of bridges and pipe rack obstacles at the refinery, we couldn’t get all the way there over the road,” Warshaw said. “We were able to barge them right to the refinery and then roll off inside the facility.”

Two 6-line double-wide Scheuerle SPMT transporters were used to roll the tower into the refinery. The road and barge transport spanned three days.

While any job like this is a huge challenge considering the size of the combination tower and installing it in the confines of a live refinery, Deep South’s team performed the work with safety as the number one consideration. Covid-19 challenges were addressed too.

“With the Covid-19 issues, we were working on a compressed schedule,” said Warshaw. “We were able to meet and even exceed the dates given.”

“We did it all,” said Warshaw.

Barnhart Crane & Rigging was tasked with removing and replacing two evaporators at a solar power plant in Nevada. The evaporators were on the third floor of the structure and were surrounded by many obstructions.

First off, the Barnhart team placed jacks and temporary saddles under the evaporator to lift it. A slide system was then installed underneath it.

The evaporator was then slid completely out of the building onto a J&R Engineering 220 gantry system.

Once the evaporator was completely clear of the building it was rigged to a 350-ton Liebherr LTM 1350 all-terrain crane.

The evaporator was swung and set on a six-line Goldhofer. Rigging was removed and it was transported to the laydown area and offloaded to stands. The process was repeated for the other old evaporator and reversed for the installation of the new ones.

The evaporator was slid out of the building and then rigged onto a J&R Engineering 220 gantry system.