The Port of Vancouver USA used its heavylift cranes to offload a shipment of wind turbine components including what it claimed to be the longest wind turbine blades ever to enter the West Coast of the United States and be transported across North America to-date. 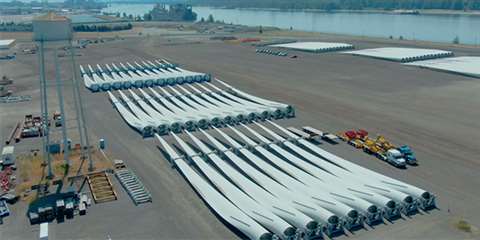 The delivery is a joint effort between the turbine manufacturer Goldwind Americas and the wind project owner Potentia Renewables.

The remaining components on this vessel include one set of 220-foot (67 metre) wind turbine blades for the same 4.2 MW rated power capacity wind turbine.

The blades were manufactured in and shipped from China. Once unloaded from the ship, the turbine blades and other major components are being moved to laydown space at the port over the span of several months. They are then being transported by Totran Transportation Services to Saskatchewan, Canada, where they are being used on Potentia Renewable’s Golden South Wind Energy Project, located on 34,000 acres of leased-agricultural land.

The port will eventually handle a total of 50 full turbines, a combination of the GW 136/4.2 and GW 155/4.2 MW models, for the Golden South Wind Project. Four additional ships carrying turbines will arrive later this summer and autumn. In total, Goldwind will import more than 750 large-scale components through the Port of Vancouver USA.

“Wind manufacturers have kept us busy this spring and summer moving wind energy components,” said Julianna Marler, CEO of the Port of Vancouver USA. “We couldn’t do this work without incredible partnerships with companies like Goldwind, as well as ILWU Local 4, Local 40, Local 92, and the river and bar pilots who are still at work every day moving cargo. In this challenging Covid-19 environment the port has been functioning well, and I am incredibly thankful for everyone’s dedication in making this possible.” 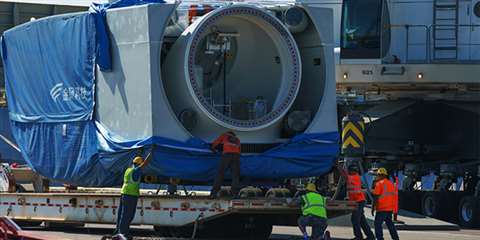