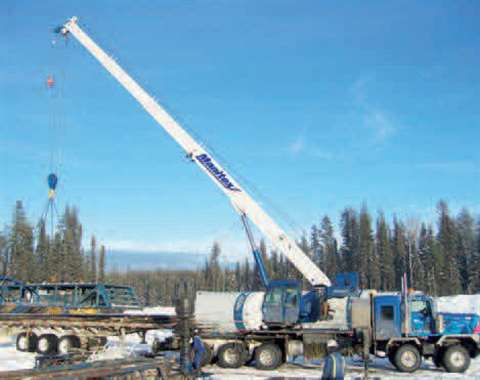 Manitex designed its 45 ton capacity 4596T especially for the oil and gas market, introducing it last summer at the Calgary Oil Show

No longer a stepchild or distant relative of the crane industry, boom trucks have a new stature as they are adapted to a spectrum of applications. Among the markets with a strong demand for boom trucks is the oil and gas sector, which has adopted this machine as a tool of the trade in exploration, drilling and production applications.

Often referred to as “iron trucks,” boom trucks targeted to the oil and gas sector are often customized to meet specific user needs, whether they are doing wireline work, fracturing or servicing wells in the oil patch.

The Tadano TM-1052 and TM-ZR504XL have been especially attractive to these customers, according to Bryan Dammann with Tadano.

They are used by contractors to transport oil wellhead equipment (manifolds) into the patch and offload them into position. “This specialized piece of equipment is very ‘well’ suited, pardon the pun, for this type of application,” he says. “The crane can be back of cab mounted, trailer mounted or rear mounted.”

“Often the components that are secured to the bed and back portion of the truck are very heavy and haul the heavy iron wellheads, manifolds, tools and the like and hence the name “iron truck.” Dammann says “iron truck” boom trucks sales are strong in West Texas, South Texas and Louisiana, as well as Canada. Often iron trucks are fitted with the equipment needed for fracturing and wireline work.

National Crane has had a long history in the oil field, and “we've been there for them boom and bust,” says John Lukow, vice president of sales and marketing for National Crane. “Over the past few years, the US and Canadian oil markets have improved with the price of oil and gas and we have seen good years,” he says. “We see 2007 being similar to 2006 which was a pretty good year.”

National does a few product customizations at the factory but when the customer wants further customization, most often the dealer or a specialty company will handle those modifications.

“What happens is these guys have a way they work,” Lukow says. “Each has their own proprietary way of handling a well and they don't like to share what they do so what we try to do is help our dealers support their particular application. Sometimes that will mean a lot of extras so that the boom truck becomes a multi-purpose kind of vehicle. Often wells are in remote sites and they want to make sure they have all they need when they are out in the field.”

National does not gear a particular model to the oil and gas business, mainly because the buyers’ needs are so varied. Most manufacturers agree that all sizes and capacities of boom trucks sell well to this market, depending on the application. Lukow says the wireline application will often be interested in the National 900A and the National 600E, 26 and 20 ton capacity, respectively.

Terex boom truck product manager Chad Brandenburg says that Terex doesn't build a boom truck geared to the oil and gas market and they don't do much of the customized work for this industry, rather leaving this work for their dealers. He agrees, however, that boom trucks customized for the oil patch “are in high demand due to more drilling and exploration for new oil deposits.”

Last summer, Manitex introduced its high capacity 4596T boom truck at the Calgary Oil Show, a targeted market effort. The boom truck has a base rating of 45 tons at an 8 foot radius. The lower frame is configured for 5th wheel attachment and trailer applications. The truck has dual stage rear outrigger jacks, and tractor mount configuration is designed for remote oil industry applications.