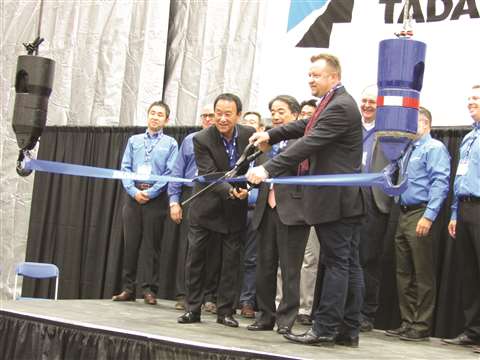 Western Canada has long been a stronghold for Tadano America’s cranes. To further expand and support its customers in Canada, Tadano recently opened an impressive new shop and service center in Edmonton, Alberta.

More than 100 customers and distributor personnel turned out on December 8, 2016 to celebrate the grand opening of the new 21,000-square-foot facility that will provide complete service, repair and warranty work on Tadano cranes. The building provides ample space for stocking spare parts and conducting training. It also features a huge, custom-designed crane washing bay that will accommodate the company’s largest all terrain cranes.
Blowing snow and sub-zero temperatures weren’t an issue in the cozy offices and warm shop area where the Canadian staff had all but rolled out the red carpet for Tadano’s top management team from Japan, Germany and the United States, as well as for representatives from their local dealer Procrane and such customers as Myshak, Sarens and Mammoet, to name a few. Drinks flowed from an open bar and guests were treated with freshly prepared sushi as well as barbecue with all the trimmings. A Tadano crane photo was airbrushed on a sheet cake and cupcakes were branded with the Tadano logo. Radar Hockey was amusement for guests and staff who competed for the highest hockey puck speeds.

“This new building brings us the opportunity to give Tadano crane owners even more advantages,” he said.
Tadano Executive Officer Shinchi Iimura flew in from Japan to attend the event.

“On behalf of the Tadano Corporation, I would like to express our continued gratitude for your support of our product,” he said. “Our goal is to be the Number 1 manufacturer of lifting equipment in the world, and this facility will help us achieve this. We have 1,000 Tadano cranes in Canada today. We will continue to support these cranes and the new ones we will bring into this market in the future.”

Yo Kakinuma, president of Tadano America, greeted and welcomed guests and thanked the Tadano employee team who worked so hard to make the new facility a reality.

“I’m pleased to see this new evolution of Tadano America,” he said. “This represents a lot of hard work, and we believe this will bring more services to our customers in Canada.”
The keynote speech was given by Robin Bailey, president and CEO of Marmon Crane Service Inc., parent company of Procrane, based in Edmonton.

“At one point in our history, we had more Tadano cranes than any company on the planet,” he said. “The main reason for our success is that these are great selling cranes and they work increasingly well in Canada.”
He remembered when his company dispatched several cranes to the North Pole and how the crew used the Tadano unit to start all the other cranes and equipment.

“It was the only crane that would start up every morning,” he said.

Spiffed up Tadano cranes from Myshak Crane Services, Sarens and a new unit from ProCrane were on display in the warehouse and available for customers to climb on and perform the proverbial tire kick. Cranes included an ATF 110G-5 all terrain crane and two GR-550XL rough terrain cranes. The two RTs were positioned adjacent to each other with the ceremonial ribbon secured to each crane’s hook block. After the ribbon was officially cut Kakinuma offered a toast wishing customers and staff continued success.