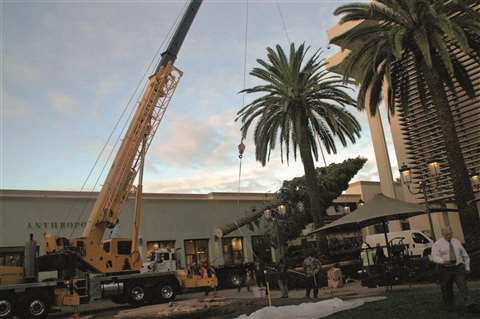 The Link-Belt 8690 was stabilized on timber mats. It was rigged with 120 feet of boom and 20,500 pounds of counterweight.

When you get to see a crane lift and erect a huge Christmas tree at a fabulous shopping mall in Newport Beach, CA, well that’s the best of both worlds, as least from my perspective.

I was in Southern California the first week of November to attend Lift & Move USA, an event that introduces young people to the crane, rigging and specialized transportation industry. (See our review of this event on page 13.) Lift & Move USA was hosted at the Long Beach, CA-based Bragg Companies.

While I was there, it seemed fitting to write a job story. It turned out Bragg had a great job – one that was very timely for the season. On November 1, Bragg dispatched its Link-Belt 8690 truck crane to Fashion Island to erect a 100-foot tall White Fir that had been cut down from Victor’s Custom Christmas Tree farm near Mt. Shasta in Northern California.

Bragg is a local expert in placing Christmas trees at shopping centers all over Southern California. The previous week they had erected trees at the Americana in Glendale, CA and the Grove in Los Angeles.

Never one to pass up a site report or a shopping trip, we met the tree crew and the crane crew at 6 a.m. in the parking lot behind Bloomingdales. It took almost an hour for the two-man crane crew to rig up the crane. During this time the tree crew set up an aerial work platform in the courtyard and began preparing the area where the tree would be placed. With the sun creeping up on the horizon, the Link-Belt 8690 was driven through a narrow entry way between Bloomingdales and Anthropology, two of many stores surrounding the courtyard where the tree stands each year.

Tree erection experts
“We’ve been putting up Christmas trees all around California for many years,” said Cameron Bragg, who met us at the job site. “It’s a big part of our work this time of year.”

The crane’s outriggers were further stabilized on two layers of timber matting. For the pick, the crane was rigged with 120 feet of boom and 20,500 pounds of counterweight. Once the crane was set up, inspected and deemed ready for lifting the crane crew and the tree crew held a meeting to discuss their plan for lifting and up-righting the tree, and then swinging it around for placement in the hole. The hole had been engineered many years ago to hold huge Christmas trees such as this one.

The sun had fully risen when the big evergreen, hauled by Roseville, CA-based Taylor Heavy Hauling, was driven into the narrow pathway directly behind the crane. Crews began the task of removing the chains that secured the tree to the trailer while other workers received and rigged the nylon slings from the crane to the tree.

Precision handling
Once the tree was free of the trailer, crane operator Glen Jenkins slowly lifted it to a vertical position. On the ground, the tree crew held ropes secured to the trunk to keep it steady. The truck and trailer were backed out of the pathway and the upright tree was slowly swung into position over the hole. While still in the air, one of the tree crewmen came out with a chainsaw to cut a plug out of the trunk so that it could be placed into the stand in the hole. The tree crew guided the huge trunk into the hole with precision and then began the task of assuring it was straight. Timber shims were wedged around the trunk to further secure the tree.

In less than an hour the tree was secure and a worker from the tree crew went up in the AWP to remove the slings and free the tree from the crane. The crew began the process of derigging the crane, retracting the outriggers and getting the crane ready to travel back to the Bragg yard.

As for the tree, it actually looked pretty scraggly. After talking to the mall personnel, I learned that in the coming days the tree would be “plugged” with many more branches, many of which were removed from the tree before tranport. The tree would be decorated with 10,000 lights and more than 20,000 ornaments.
“It will look even bigger and much fuller when they get all the additional branches plugged in and the decorations on it,” Bragg said.