24/7 Lifting, a Yonkers, NY-based crane rental company has purchased a Grove GMK5250L, which the company is using for a range of tasks, including lifting HVAC and generator units onto New York City buildings. 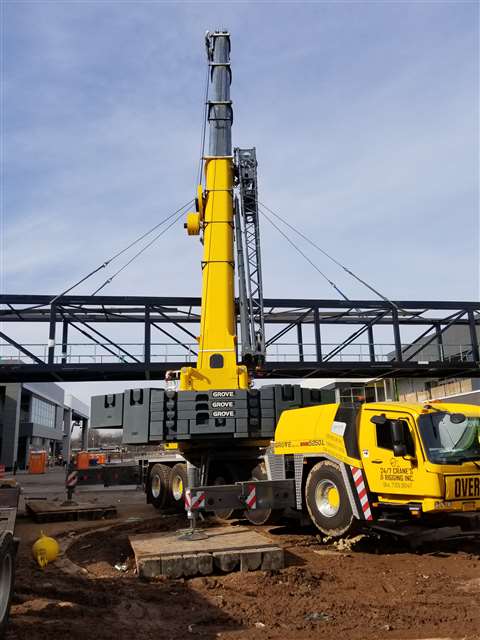 The GMK5250L’s easy mobility, fast setup and breakdown allows the contractor to perform picks where two cranes of the same size would be typically used.

John Corr, scheduling and estimating manager at 24/7 Lifting, said the crane was able to easily navigate the area’s crowded streets while adhering to the city’s permit requirements.

“We recently did a job placing concrete beams with our new GMK5250L for which the general contractor had requested not one, but two 300 USt cranes,” Corr said. “But with the easy mobility, fast setup and swift breakdown of our GMK5250L, we didn’t need a second crane. We just moved it around and we were able to complete all the lifts, including a 13,000-lbs AC unit pick. The contractor was very pleased with it.”

24/7 Lifting took delivery of its GMK5250L in October 2019. The company already owned a GMK3050B, but needed a larger capacity crane to service taller high rises in Midtown Manhattan and other areas.

“We got the GMK5250L because air conditioning and electrical companies were asking us for 20, 30-story lifts, so we decided to bring it into the fleet,” explained Corr. “A lot of the buildings in Manhattan and the surrounding areas are just six stories, which make the GMK3050B perfect for them. But when you get into the Midtown area, and some parts of Queens, most of the new buildings being built are 20 or more stories.”

Corr said his company is able to perform more jobs with the GMK5250L, sending it to nightime lifts at different locations even when the crane is dedicated to larger, multi-week projects during the daytime. At a month-long project in the New York suburb of Montebello, the crane helped lift concrete beams weighing up to 8,000-pounds at a 125-foot radius during the day, while travelling into Manhattan for overnight projects.

“Late at night is when you’re able to deal with the logistics of doing picks in Manhattan,” Corr said. “We went in and out of the island even as we serviced the Montebello project during the day. For one pick, we had to set the crane up over a subway station. That was challenging but it was completed without any issues.”

The 300-ton capacity five-axle crane has a 230-foot seven-section main boom, along with a 69-foot hydraulic swingaway jib that helps it lift higher and reach further. For added versatility, the jib can take a 26-foot boom extension, two 26-too jib inserts, or a combination of both for a total possible jib length of 121 feet. Another benefit of the hydraulic jib is its 50° offset, compared to the usual 40°, which helps it to reach further over obstacles. This is a big advantage in places like New York.