A global microchip shortage has caused huge supply chain issues for a range of products – computers, cars, appliances and smartphones to name a few. To ramp up production of these small but critical components, microchip makers are building new manufacturing facilities as fast as possible. Phoenix, AZ is a hot spot for new microchip plants.

The largest crane on the job is Maxim Crane Works’ Manitowoc 31000, which is lifting and placing the preassembled roof trusses.

“We are on the map in a big way,” Phoenix Mayor Kate Gallego told the news station last fall. “If anything, it’s going to help us with the recovery of the shortage.”

Taiwan Semiconductor Manufacturing Company (TSMC) and Intel are currently building new production facilities in the Phoenix area. The construction and expansion of new plants has been a boon for the crane and transport sector.

Back in February, I was in Glendale, AZ for the SC&RA Specialized Transportation Symposium. I met up with Marco Crane & Rigging’s Dan Mardian and Uli Mack to catch up and talk about crane demand. I had heard about the TSMC job, located in North Phoenix along Loop 303. At any given time, the project has some 39 cranes working dawn to dusk. Crane companies supplying machines to this job include Marco, Maxim Crane Works, Southwest Industrial, Bragg Companies and Dielco.

We actually tried to get permission to get on the jobsite in advance of my visit, but understandably, the contractor and the owner were reluctant to let media onsite. I was able to get a few shots of the job from afar – behind a fence just off a busy freeway.

TSMC has invested a reported $12 billion into the new microchip plant. When the plant goes online in 2024, the company is set to start cranking out 5-nanometer chips, with a goal of 20,000 wafers a month.

The most notable crane on the jobsite is the Manitowoc 31000, the third job for this huge crane. Previously it had been at two stadium jobs, first in Atlanta and next in Arlington, TX. Getting the 2,300-ton capacity crane to the jobsite required 153 truckloads. Several cranes were needed to assemble the giant crane.

According to Marco Crane Superintendent CJ Ryan, the 31000 is lifting preassembled truss sections atop the four-story building.

“The trusses are flown up and held in place while doing the connections,” he said.

Marco Crane & Rigging has about 10 cranes on the job at any given time.

“We’ve had a good variety of cranes out there,” said Ryan. “Most of our work has been flying rebar and forms for the concrete flooring. Our cranes have done a little bit of the structural work, but primarily we’ve been working for the concrete division.”

“The telecrawlers are very useful because they can get in those tight spaces,” said Ryan. 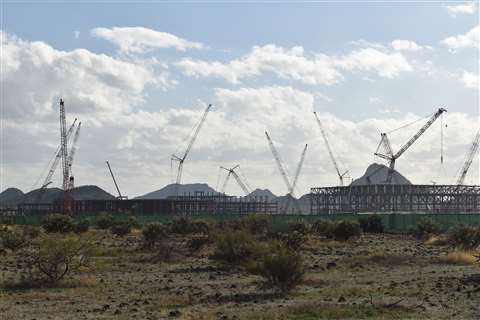 The job has progressed smoothly, with logistics being the biggest challenge.

“There’s a lot going on out there with so much work and all the subcontractors,” he said. “It requires coordination to deliver and remove equipment.”

And of course, the entire crane sector is dealing with a qualified operator shortage.

“Being able to man all these projects is a challenge,” Ryan said.

He anticipates the first phase of the TSMC project will finish in the next six to eight months. But this is expected to be a 10-year project with expansions already planned. Marco is also supplying cranes to the Intel expansion project in Chandler, Arizona.