Because real estate development is a major part of South Florida’s economy, construction cranes are a common sight on skylines in almost every metropolitan area. When Hurricane Irma tore through the region in September, three tower cranes bent and collapsed under the pressure of the storm’s 100 mph winds. The ALL Family of Companies was called in to help undo some of the damage and dismantle the tower crane piece by piece. 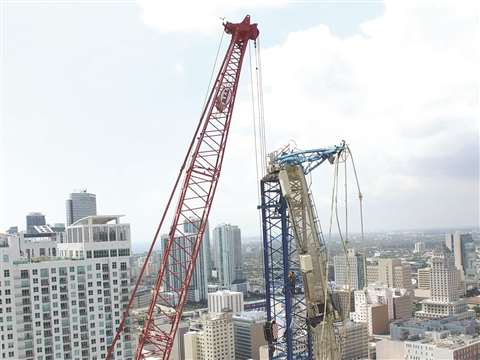 ALL Crane dispatched crews from its Orlando and Tampa yards.

“They weren’t our cranes, but regardless of the supplier, we are always there for our customers in a time of need,” said Mitch McDonald, general manager of ALL Crane Rental of Florida, a member of the ALL Family of Companies. “The process to disassemble certain tower cranes before a storm like Irma is just infeasible due to the configuration of many of the cranes.”

And the process requires time, a resource in short supply for those in the path of an advancing storm.

Instead, McDonald explained, the practice is for tower crane jibs to be left unlocked during storms so they can follow the wind like a weather vane. This decreases strain and reduces the likelihood of the steel bending or snapping. Theoretically, this method can withstand winds up to 145 miles per hour. While Hurricane Irma’s winds came close to 100 mph, it is possible that winds were much higher at the skyscraper level.

When the storm passed, determining the cause of the wind-damaged crane would have to come later. L&R Structural Corporation, the jobsite’s general contractor, needed fast help and called ALL Crane.

Crews from ALL Crane Rental of Florida in Tampa and All Sunshine Rental in Orlando were summoned to the scene of one of the three damaged cranes, a Peiner SK315 tower crane, that was helping to construct a 32-story, 464-unit apartment complex on Biscayne Boulevard in downtown Miami.

At the time the storm blew through, the crane was elevated to 420 feet. During the storm, the boom snapped, sending debris falling to the jobsite below. The jib fell onto the roof of the structure. It remained connected to the main boom by a cable and was partially hanging over the building’s side. The crane’s counterweights – weighing tens of thousands of pounds – fell straight down to the construction site below. Fortunately, the entire area had already been evacuated ahead of the hurricane, and there were no injuries.

ALL Crane brought two of its own cranes to the scene. A Grove GMK6400 was used to lift riggers to secure the broken pieces of the jib. A Manitowoc 16000 crawler was used to remove the jib and the rest of the tower pieces and bring all safely back to ground level.

“We choose the 16000 for this job because we could crawl it into place,” said McDonald. “Being in a crowded metro downtown area, we had a limited amount of room to put the boom together. We built as much of it as we could on the ground, but it took up the rest of the city block, so we boomed up and built the rest in the air. Having the ability to crawl was vital.” 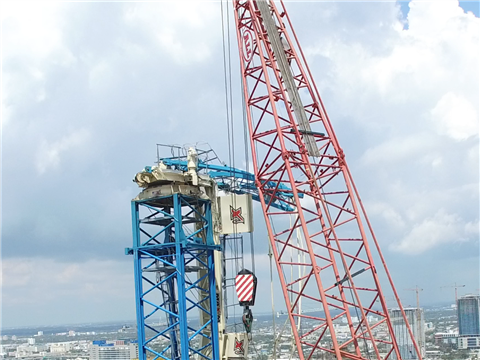 The damaged tower crane sections that were removed were of varying sizes, with the largest being 71,000 pounds and 42 feet long.

The Manitowoc 16000 will remain at the scene to perform repairs caused by the counterweight that fell and finish the work on the apartment, which was just weeks away from completion.

McDonald also credited many others for helping clear the scene.

“Before our guys even got there, Richard Graham from Diamondback Hoist and Rigging was able to use a portable winch to move part of the dangling jib over,” McDonald said.

His efforts are the reason the city’s metro rail line below was able to re-open so quickly, according to McDonald.

“He was a true professional and great to work with,” McDonald said.

McDonald said the ALL team was pleased to be part of the national wave of unity that swept into the city when the storm passed.

“We conduct job safety analyses to discuss potential hazards, and plan how to avoid them,” said McDonald. “But when nature punches folks to this degree, you need another plan. We were glad to roll up our sleeves and pitch in to help the customer, the other crane company and the city.”