The U.S. Air Force B-1 Bomber Apocalypse was retired in 2002 after a long and storied career. The aircraft, which could reach speeds of 900-plus mph (Mach 1.5), last served with the 128th Bomb Squadron at Robins Air Force base in Warner Robins, GA. The plane had a high number of flight hours since it was commissioned in the 1980s. 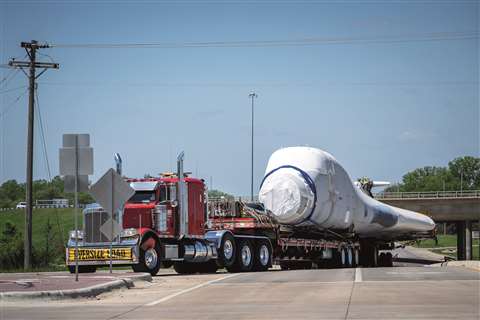 Today the B-1 Bomber is a part of a research project that will help the military determine structural fatigue of aged military aircraft.

The B-1 is a supersonic variable-sweep wing heavy bomber that was produced by Rockwell International, now a part of Boeing. Commonly called the “Bone,” from its name B-One, it is one of three bombers serving along with the B02 Spirit and the B-52 Stratofortress. Some 45 of the original class of B-1 bombers are still in service today.

Retired 20 years ago to the Air Force Boneyard at Davis-Monthan Air Force Base in Arizona, the Apocalypse was recently recommissioned for research at the National Institute for Aviation Research (NIAR) at Wichita State University in Park City, KS. The challenge was getting the 40-ton, 130-foot long fuselage from Arizona to Kansas. 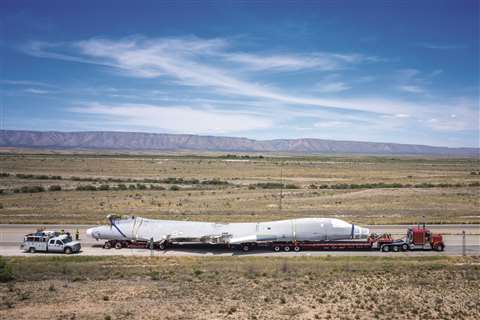 The 29-foot wide transport made routing a challenge, especially finding entry/exit points agreeable to all the states involved. Finding a route that had sufficient turns was also a challenge with a 166-foot long transport rig.

As well, special care had to be given to the delicate and expensive airplane fuselage. Berard had to figure out adequate lashing points that satisfied regulations without damaging the airplane. The Berard team spent a lot of time developing the transport rig that had odd support points and a long cargo head swing.

Project Manager Justin Salter said Berard has transported a lot of “cool” cargoes in its history, but this was one of the coolest. The heavy haul had to traverse several mountains with steep grades, twisting roads and a lot of 90 degree turns. 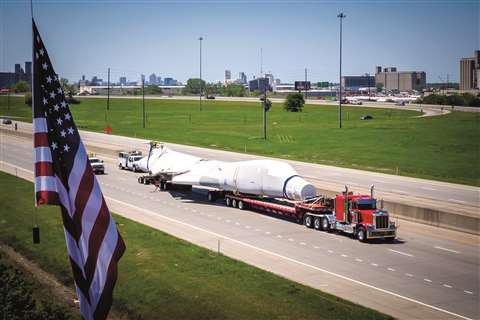 Berard had to figure out adequate lashing points that satisfied regulations without damaging the airplane.

“This complex move was a monumental team effort that integrated many transportation elements in order to ensure the safe delivery of the B-1 fuselage to NIAR,” said Melinda Laubach-Hock, NIAR B-1 program manager and Aging Aircraft Lab director, in a statement. “The unique experience of each team member was instrumental to the success of the operation.”

Today the airplane is a part of a research project that will help the military determine structural fatigue on aged aircraft. According to the NIAR, the entire airframe was 3D scanned to create a detailed “digital twin” model to help identify areas of the aircraft that suffer high levels of fatigue and otherwise collect data that could help predict future maintenance needs among the B-1Bs still in service, according to an article by Joseph Trevithick on the website The War Zone | The Drive.

“Structural fatigue, in particular, has long plagued the Bones and has become an increasingly more acute issue after years of heavy use in combat, leading now to serious restrictions on how and how much the bombers can fly during both training and actual operations,” the article said.

Air Force Lieutenant Colonel Joseph Lay was quoted in the article, “We are taking a real aircraft from the Boneyard, and it will fly again in a digital format.”

Researchers will create a detailed virtual model that can be assembled and disassembled on a computer. They will identify faults and stress points to be able to create better, safer and stronger military aircraft.

“Our dedicated team members averaged over 200 miles per day at 29 feet wide through five states and a couple of 300-mile days,” said Salter. “The trailer configuration really performed as designed and made those obstacles easier to tackle.”

He said the Berard team, led by driver Jamie Houghton, enjoyed seeing people line the streets of the small towns to watch the plane and its convoy pass by and to see the smiles on all the kids’ faces.