Today’s sports stadiums are more than just a place to go watch a baseball, football or soccer game. They are being designed as an experience center, a place where people can eat, drink, shop and enjoy a sporting event. The latest sports stadiums are architectural and engineering wonders, and just about all of them now are designed with retractable roofs.

With all the new features, stadiums have also become a huge construction challenge for all the entities involved in building them. With each stadium, retractable roofs are larger and more complicated. The trusses used to form these roofs are also longer and heavier. 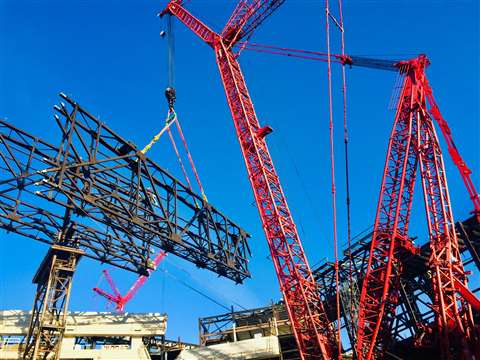 The lift plan involved the use of the Manitowoc 31000 and several solutions from Enerpac, which supplied a unique sling adjustor for below-the-hook positioning of the heavy loads. The Enerpac Synchronous Hoist System is a hydraulic-powered crane attachment. PHOTO: Texas Rangers, 2019

Such is the case at the $1.2 billion Texas Rangers Globe Life Field, which is set to open this summer when and if Major League Baseball resumes. The stadium has been under construction for the last four years, and the centerpiece crane on the project is the 3,000-ton capacity Manitowoc 31000 owned by Maxim CraneWorks, which supplied close to 24 cranes for the project. This is the second stadium job for the crane, which arrived in Arlington on some 150 truckloads in December 2018.

A rendering of the new Globe Life Field with its retractable roof system. Photo: HKS Architects, 2019

When it came to lifting and positioning the roof trusses, project contractors Manhattan Construction and W&W Steel had a huge task ahead of them. W&W Steel fabricated each piece of the structural steel for the roof, using some 19,000 tons of steel.

The job was so spectacular that it was featured on the television series Inside the Blueprint, which aired on Fox Business in August of 2019, shortly after the roof trusses were lifted and positioned into place.

“The challenges we faced for W&W Steel specifically was the critical lift planning for our heavy lift truss assemblies,” said Pat Dougherty, project manager, W&W Steel Erectors, (in the video). “We averaged between 900,000 and 1.5 million-pound weights that we made sure we planned effectively and safely to perform each lift.” 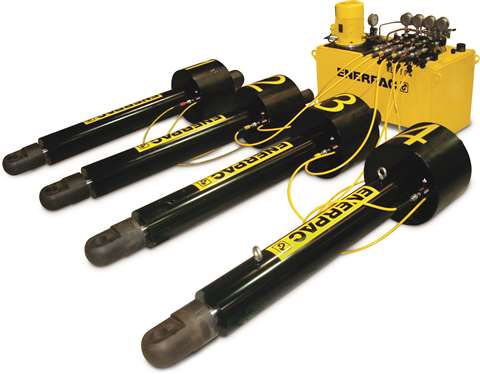 It was determined that the capacity and precision needed to place the trusses could not be accomplished with just a crane.

“It’s the most complex truss job I’ve ever been a part of,” reflected Dougherty.

Lift rigging plans were developed by Stanley D. Lindsey & Associates (SDL), a structural and civil engineering firm. Their work included designing the temporary steel required to support the stadium structure until it was completed as well as all the crane configurations, rigging designs and critical lift sheets. Lucid Engineers was brought in for peer review of the lift rigging plans. The design and architecture were performed by HKS Architects. Uni-Systems Engineering created the retractable roof mechanization.

The lift plan involved the use of the Manitowoc 31000 and several solutions from Enerpac, including a unique sling adjustor for below-the-hook positioning of the heavy loads. The Enerpac Synchronous Hoist System is a hydraulic-powered crane attachment that is used with a remote control system. The Globe Life Field application was the first in which a wireless controller was added to the lift plan. This allowed a single operator to precisely position heavy loads within millimeters.

“We worked on the sling adjusters [SyncHoist system] to develop the lift rigging plans,” said Lucid Engineers President Jim Ronning (in the video). “There are large ground assemblies inside the stadium, there are multiple cranes, there are very heavy lifts, up to 1.5 million pounds and it requires careful coordination by all the contractors, and even a lot of subcontractors.”

Lifting the roof trusses, which weighed between 900,000 to 1.5 million pounds at up to 600-plus linear feet, needed to be controlled from the ground for safety and logistics purposes. Simply put, “a failure of the system from any component would be a catastrophe,” said Ronning.

By using the Enerpac SyncHoist system, only one crane was necessary for the roof truss pick plan throughout the project. The steel contractor was able to wirelessly control each roof truss 200 feet in air and precisely position it down to millimeters.

Utilization of the SyncHoist system on such a large-scale project required thorough development and analysis by the Enerpac team.

“When it comes to manufacturing products, we have a pretty rigorous line testing,” said Enerpac President Jeff Schmaling (in the video). “We also do a lot of validation testing, especially when we’re talking about new product development. You don’t know the weak points of the design until you expose them to some pretty rigorous testing.”

Enerpac has been involved in several similar stadium jobs including the Las Vegas Raiders’ Allegiant Stadium and the Atlanta Falcons’ Mercedes-Benz Stadium.