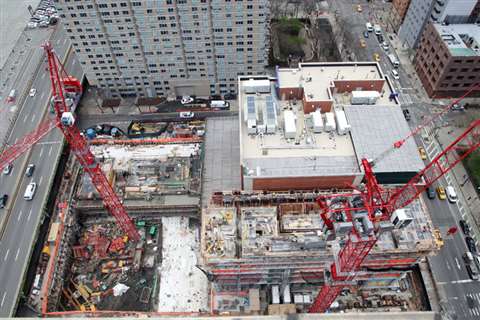 The first of the company’s 26.5 US ton (24 tonne) capacity MR 418 luffing towers, which was launched at the ConExpo exhibition last year, is working on a condominium development at 626 First Avenue in Manhattan. The development is made up of two 91.4 metre towers that mirror each other in size and shape. A swimming pool will connect the two towers, a spokesperson said.

Jobs for the two tower cranes include lifting buckets of concrete, formwork, structural steel and other construction materials that weigh up to 9 tons (8 tonnes). On completion of the First Avenue project in spring, both cranes will move to West 57th Street to help construct a residential tower.

Tom Auringer, Crane & Rigging owner, said, “Buildings in New York City are getting taller, which means we enhancing our fleet by ordering larger cranes. Bigger structures call for more height, more line speed and more capacity. The MR 418’s line speed of 833 feet [253 metres] per minute saves time and money over the course of a project – it’s the fastest electric crane out there.”

The electric power of the MR 418 helps Crane & Rigging meet emission regulations. Auringer explained that the city’s Department of Buildings has been pushing for electric cranes, even expediting permits to obtain power for the cranes.

“The department likes that the cranes are greener, producing less pollution, and that they emit less noise,” Auringer explained. “When you file building permits, the electric portion usually gets dragged out. The city wants newer equipment that is more efficient, easier to maintain and easier to inspect.

“The MR 418’s ability to free stand at high elevations is a plus,” Auringer added. “Right now the crane is set up on a concrete foundation and lifting to the second floor. The building reaches 167.6 metres, so we will jump externally as work progresses. So far it’s performing great on the job.”

A second MR 418 owned by Crane & Rigging is working on the Brooklyn Hub building at 333 Schermerhorn Street. The project is the development of a mixed-use residential and retail space. It will be one of the tallest buildings in Brooklyn, a spokesperson said.

The crane is configured with 39.9 m boom and is freestanding at 54.8 m. It will climb internally as work progresses until November 2015. Work will include lifting concrete rebar, formwork, structural steel and a 5 ton (4.5 tonne) space frame. The building is due to be completed in 2016.

The MR 418 has an optional 320 LVF 120 hoist, with 825 m of rope capacity on the winch drum and a maximum speed of 253 m per minute. It also luffs the jib from the horizontal position to the vertical in just 1 minute 15 seconds, the manufacturer said.