McLaren Engineering’s construction engineering division used a crane to lift a crane to a rooftop at the iconic Tiffany & Co. building on Fifth Avenue in New York City. 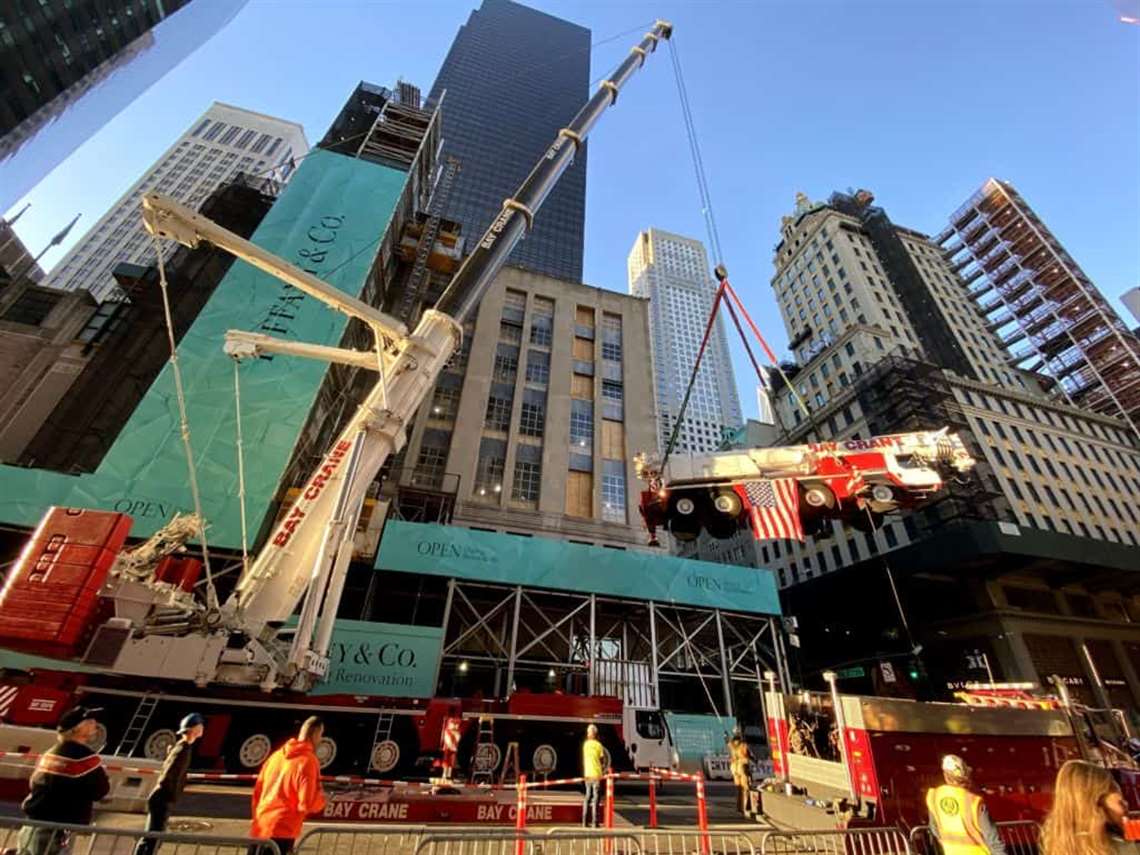 The luxury brand building is amid a multi-year renovation, and McLaren Engineering has applied several lifting solutions to support the reimaged upgrades.

In particular, the previous 1980 building extension that once housed office space, is being replaced with a new tri-level addition designed with double-height and column-free spaces wrapped in two different glass facades — creating more interest from the street while maintaining energy efficiency, according to McLaren Engineering. The vertical renovation and rebuilding of the top three floors required out-of-the-box construction support.

Taking space, time and budget into consideration, McLaren’s construction team turned to unconventional methods of crane engineering to figure out how to work within NYC’s tight building space constraints. The solution was this: a crane would pick up another crane to deposit it atop the Tiffany & Co. building in the heart of Midtown, New York City. McLaren engineered the lift of an LTM 1130 mobile crane onto the roof of Tiffany’s utilizing a 500-ton Liebherr LTM 1500 all terrain crane.

The fully assembled LTM 1500 (utilized the y-guy superlift kit) required eight trucks delivering more than 363,800 pounds of counterweight. As a result, McLaren’s construction division also provided the crane engineering for a Tadano TR450XL that assisted in putting the LTM 1500 together.

“With time and budget in mind, we provided crane plans, permitting, and the structural engineering necessary for the lift itself and to support the crane once placed,” the company said.

The 130-ton capacity LTM 1130 weighing approximately 205,000 pounds with full counterweights, was lifted seven stories over the streets of Manhattan to begin work on the new three-story glass-walled addition that will sit atop the existing seven-story limestone-and-granite historic building.

During the pre-bid process, McLaren worked with the contractor Orange County Ironworks (OCI) vetting a geometry and capacity checks concept for the cranes and then a preliminary look into building reserve capacity. This solution saved several months on the project schedule, allowing OCI to work around the clock through New York City’s Holiday Embargo, when the city prohibits cranes and work in the streets in most areas of the city the week before Thanksgiving until the week after New Year’s Day, saving the project millions of dollars.

McLaren put together seven different crane plans for this project, designed rigging to lift the crane, designed rooftop dunnage to support the crane on the roof and analyzed the building for imposed loads. This ultimately lead to reinforcement design of a couple of existing building columns.

To see a video of the lift, please visit https://press.tiffany.com/wp-content/uploads/Time-Lapse-Video-Mobile-Crane-Lift.mp4. Video courtesy of Tiffany & Co.