Rising up from 270 Park Avenue in Midtown Manhattan is the JPMorgan Chase headquarters building. Renderings for the 60-story skyscraper show a gorgeous building with many glamorous amenities. It will be New York City’s largest all-electric tower with net zero operational emissions.

With a footprint of 200 by 400 square feet, NYC Constructors determined that four tower cranes would be needed to handle all the lifting for the structural steel tower above the third floor. Photo: DBOX for Foster + Partners

“270 Park Avenue is set to be a new landmark that responds to its historic location as well as the legacy of JPMorgan Chase in New York,” said Norman Foster, founder of building designer Foster + Partners. “The unique design rises to the challenge of respecting the rhythm and distinctive streetscape of Park Avenue, while accommodating the vital transport infrastructure of the city below.”

The goal of JPMorgan Chase and the design firm was to create a timeless addition to New York’s upscale Park Avenue. Work on the building started last year with the demolition of the Union Carbide Building previously on the site.

In bidding the crane work, Bhaskaranand said they needed to consider the steel members, weights and delivery options, plus the building’s large footprint.

“The sheer footprint at ground level is approximately 200 by 400 square feet,” he said. “We looked at all the essentials and determined that four tower cranes would be needed to handle all the lifting for the structural steel tower above the third floor.”

What cranes were used?

“We like Favco cranes because they fit our construction model, plus we have a great relationships with the dealer and the manufacturer,” said Bhaskaranand. “We’ve used Favcos for a long time. We also have the 760 and 440 models in our fleet. I guess you could say we live and breathe Favcos.”

The four cranes at the Park Avenue job are run on diesel, which gives them more power and is a more efficient use of the cranes’ resources.

The four cranes were erected in October 2021 thru January 2022. The structural steel part of the project is expected to be completed by the end of 2023.

“Contractually, it should be done by the first quarter of ‘24,” he said.

Currently, the cranes are working on the 11 mezzanine level of the building setting steel on one of six truss floors. 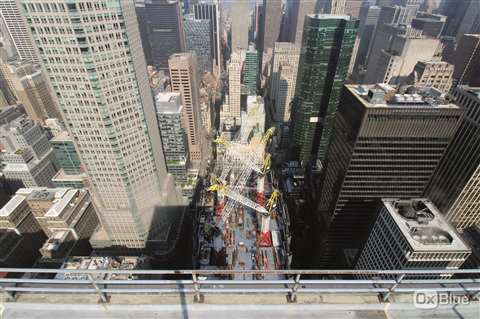 NYC Constructors uses an internal jumping system that allows the cranes to jump and still stay close to the working loor level.

“The building is at 25 percent of its overall height,” Bhaskaranand said. “The weights of what we are lifting vary. We look at efficiencies to capitalize on the lifting capacity of the cranes. They are working close to each other, so there are times they make critical or tandem picks. We try to bring up the steel in larger sections. It’s more efficient than bringing up in smaller sections.”

NYC Constructors uses a propriety internal jumping system they designed so that the cranes can jump and stay close to the working floor level.

“When tower cranes are free standing and coming up through the building it slows down construction,” Bhaskaranand said. “Large sections of floors cannot be finished. Our system keeps the crane above the turnover floor, so those levels are always 100 percent ready for the concrete per the building design.”

A significant improvement is the reduced tail radius of 25 feet compared with the standard M900D at 30 feet. On a 9.9 by 9.9-foot T763 tower system, these cranes will free stand at 144 feet.

Power for the M900F-ST H32 is from a Caterpillar C13 or C15 Tier 4 diesel with up to 540 hp. Output of the C13-T4 is similar to the C15-T4 and does not need an EGR cooler. Control for the crane is via the latest version of the Favelle Favco LINEC (Load Indicator and Electronic Control system) operating system.

The two cranes owned by NYC Constructors have the C15 Caterpillar engine and the two on rent from Lomma Cranes have the C13 engine. While the engines are a bit different, they are equal in the power they deliver.

As the building rises, the footprint will get more narrow.

For the most part, he said the job has run smoothly. On any project in New York City, there are logistical challenges to work out with transportation officials, transit authorities, DOB and other entities.

“There will always be issues to work through,” he said. “Sometimes we have a problem getting approval quick enough. We just work around these issues to keep the job moving.” 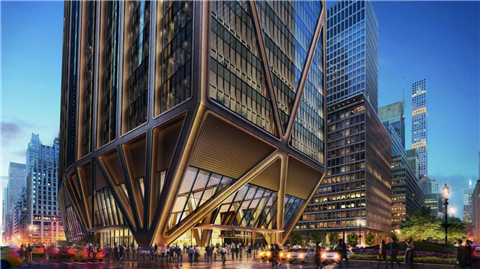 According to designer Foster + Partners, glass facades will be bound by metal detailing, and the broadside of the rectilinear volumes will be crisscrossed by diamond-shaped trusses. Tapered trusses will continue on the ground level. The trusses will fan up from the sides of the base, making the whole structure appear to stand on stilts. Photo: DBOX for Foster + Partners

When the job started, Covid-19 protocols were strict, but have loosened up. All workers had to be vaccinated or submit a weekly Covid test before coming onto the jobsite.

Lomma Cranes’ Frank Signorelli has been impressed with the high performance of the Favco cranes.

“They operate very efficiently and cover the entire jobsite,” he said.

Favelle Favco’s Michael Khoo said his company’s cranes have performed well on many high profile jobs in New York City. He has worked with Lomma Cranes and NYCC for many years and has a great relationship with the two companies.

“We know each other well,” Khoo said. “Even though, TES Inc. (a Lomma company) is the dealer, we communicate directly in most situations with NYCC to manage issues relating to the cranes. NYCC has also provided input into some aspects of the crane design which assisted Favco in coming up with a machine that can work well on a jobsite.”

Additionally, Khoo pointed out that these cranes are designed for safe operation, first and foremost.

“I believe Favco over design the cranes to be more conscious on the safety aspects,” said Khoo. “We have the safest cranes on jobsites. Besides, NYCC has a professional crew that knows what they are doing.”