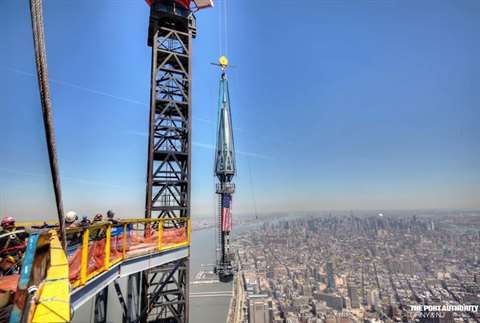 The final section of the spire of the Freedom Tower in New York City was hoisted to its final position last week. The building now rises to a height of 1,776 feet.

The final section of the spire was hoisted to the top of the building on May 3. Weighing more than 700 tons, the rigging of the final section included an American flag waving in the wind, a patriotic gesture that pleased hundreds of onlookers who came out to witness the event.

With the spire installed, the building tops out at 1,776 feet. The symbolic height memorializes the year in which the Declaration of Independence was signed. Freedom Tower will be the tallest building in the Western Hemisphere, according to the Port Authority of New York.

The 408-foot spire will serve as a broadcast antenna and communications center for the building.