Eschenburg, Germany-based Giersbach und Stoll specialises in all aspects of construction, renovation, dismantling and disposal. Its core area of business is assembly of precast concrete elements. Contracts extend from the erection of domestic garages to the construction of entire industrial buildings. 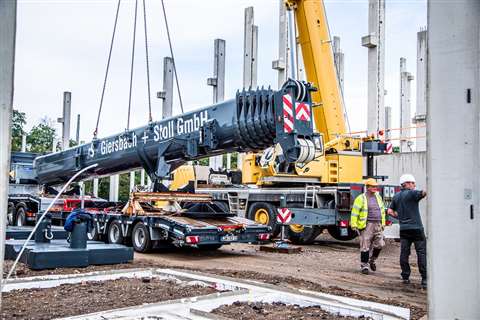 The main boom of the Tadano ATF-220-5.1 can be removed to reduce its axle loads from 12 tonnes to less than 8 tonnes

Giersbach und Stoll secured an ambitious contract in Cologne-Kalk which required the versatility of its 220 tonne capacity Tadano ATF-220-5.1 all terrain crane. The project involved lifting heavy concrete parts for an industrial hall to a great height.

The company’s ATF-220-5.1 spent four weeks on a construction site at Cologne-Kalk in Germany

The A45 and A4 roads between Eschenburg and Cologne are home to a number of weak bridges, which means heavy goods vehicles are not permitted to cross them. According to the German road traffic licensing regulations, a heavy goods vehicle is defined as a vehicle combination with a total weight exceeding 41.8 tonnes or a vehicle with an axle load of at least 12 tonnes. As such, the ATF-220-5.1 is not permitted to use these bridges due to its axle load of 12 tonnes.

To solve this the main boom of the ATF-220-5.1 can be removed to reduce the axle load to less than 8 tonnes. It means even derated bridges no longer pose a problem. With the main boom removed, Giersbach und Stoll could take a direct route to the construction site in Cologne, some 120 kilometres away. The lower axle loads even allow for simplified and longer-lasting driving permits. A total of four vehicles were used to transport both the entire counterweight and the crane boom to the site.

On site the 220 was set up in less than two hours with two technicians and a crane operator. Once the crane was ready to go, it was put straight into operation with a full counterweight of 71 tonnes. Lifting the concrete walls and ceilings weighing up to 17 tonnes to heights of 13 metres did not present a major challenge for the crane in this configuration, the company said.

The crane spent a total of four weeks on the construction site in Cologne-Kalk.