Lifting and placing the spire atop the One World Trade Center building in NYC was an incredible feat of engineering.

It was a crowning moment on a beautiful morning in May 2013 when the final spire for One World Trade Center was set in place on top of the Freedom Tower. 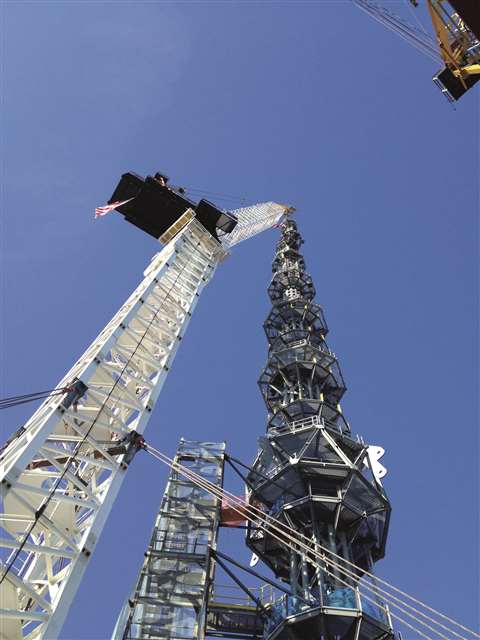 The top section of the 408-foot spire brought the building to its final height of 1,776 feet, a symbolic elevation that memorializes the year the Declaration of Independence was signed.

The top section of the 408-foot spire would bring the building to its final height of 1,776 feet, a symbolic elevation that memorializes the year the Declaration of Independence was signed.

Placing the spire and its pedestal required a monumental effort that involved a cadre of designers, engineers, crane operators, riggers and crew, all of whom were proud and honored to take part in this sentimental project.

Two diesel-powered 760 Favco tower cranes, which were on site since the project was a hole in the ground, played a huge role in the successful project, said the late James Lomma, owner of the Favco cranes.

According to an article in the July 2013 issue of American Cranes & Transport, the first truckloads of the spire sections were hauled into New York City in the wee hours of the morning in the spring of 2013. A 600-ton Terex Demag AC500 owned by New York Crane lifted the sections off the transporters to a staging area for hoisting them to the top of the building.

While the final touches were being put on the lift and erection plan, the tower cranes had to be re-rigged and prepared for their final job on the project. DCM Erectors prepared the lift plan for General Contractor Tishman Construction Corp.

DCM purchased a new winch drum that could handle 3,500 feet of cable, according to Lomma. New York Crane supplied the 14 tower sections and climbing frames to free stand the main crane to 180 feet, the height needed to erect the spire. 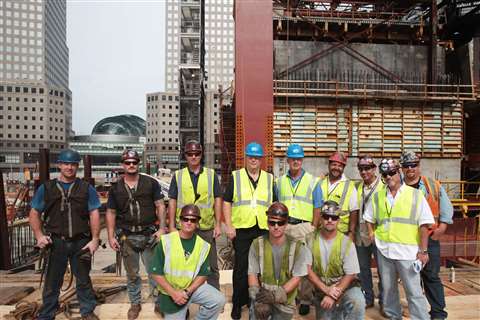 The rigging crew gathered for a picture, proud of their history-making roles.

“This was a really tough job, if you can imagine freestanding a tower crane 180 feet on the top of a 1,600-foot high building,” Lomma said.

The Favco M760 hoisted the spire foundation and sections to the top of building. Once the pieces were stored on top of the building, the second Favco M760 began tedious process of erecting the spire sections. Many entities played a role in the spire erection, including ASC Industries/Python America, which supplied the high performance wire rope used on the tower cranes. Slingmax designed the Twin-Path slings used to lift the spire section.

Patriotism at the top

Rigged to the top section of the spire was an American flag, one of many patriotic acts associated with this project. 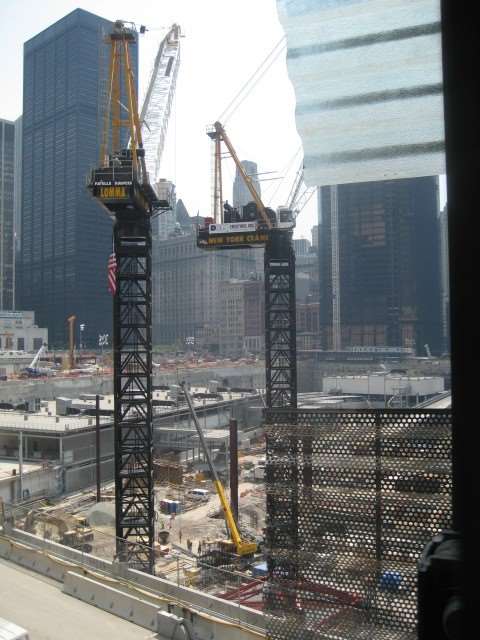 The two Favelle Favco M760D tower cranes were erected at Ground Zero in 2006.

Once the top spire section was place workers on top of the building cheered, celebrated and dried their eyes, as did millions of Americans watching the drama of the erection on live television.

Soon after the spectacle of the spire erection the tower cranes were dismantled. The first crane was taken down by second one, and the second crane was taken by a Timberland derrick.

Below the Freedom Tower is a memorial to the almost 3,000 people who were killed when terrorists flew hi-jacked commercial airliners into the World Trade Center’s twin towers, causing their collapse.

There are hundreds of videos on the Internet of the placing of the spire on One World Trade Center. Among our favorites is this one: https://www.youtube.com/watch?v=p-U80-_bPtQ