The phrase “bigger is better” doesn’t always ring true, especially in the construction world. Tasked with removing a tower crane from a new high-rise building in downtown Austin, TX, Able Rigging, based in New York, used a derrick crane on the roof to dismantle and remove the tower crane. However, that left the challenge of removing the 90-foot boom derrick crane from the rooftop after the tower crane was taken away. 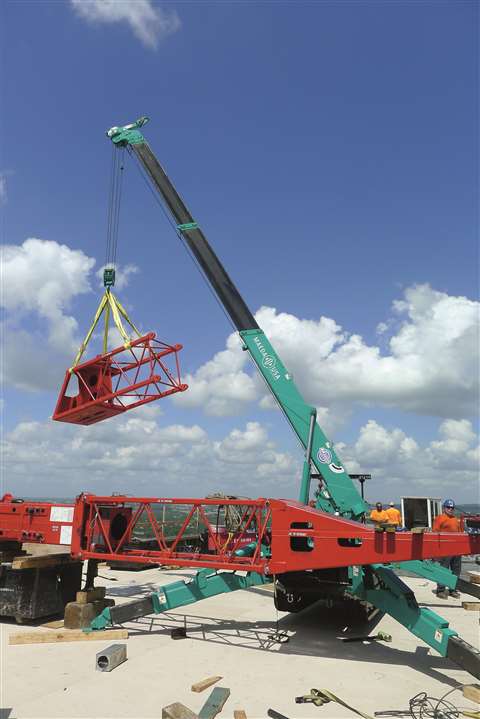 A Maeda MC305 mini crane was the solution to provide the lifting to disassemble the derrick and get it off the roof of the building. Space on the roof of the 29-story building was limited, and Able needed a machine that could be hoisted to the roof by the tower crane, disassemble the derrick, provide powerful lifting capabilities in a confined space and be removed from the roof by elevator.

With its small size and weight, Able’s crews easily used the tower crane to hoist the Maeda to the roof of the glass building overlooking the Colorado River. Once the tower crane was removed, the 6,560-pound capacity Maeda MC305 lifted the derrick’s components – weighing up to 2,000 pounds each – during disassembly and then lowered them from the highest roof level down to a lower level with access to the construction elevator. The derrick components were then taken back to ground level on the elevator.

“We chose the Maeda MC305 because it gave us the power, flexibility and the ease of use we needed for the job,” said Bobby LaChapelle, vice president of Able Rigging. “And we definitely used the MC305 to its full capacity.”

The MC305 was rented from Maeda USA’s dealer Inman Texas Company, based in Houston.

The MC305 is 4 feet 3 inches wide and 5 feet 7 inches tall in its travel configuration. It can fit through a standard double door for interior jobs. Depending on the power package, the overall machine weight is 8,550 pounds (diesel only model) and 8,950 pounds (dual power, diesel and electric motor model). The MC305 has a boom length of 41 feet and a maximum lift height of 47 feet, when equipped with the optional Searcher Hook.

Maeda produces four models for the American market, including three mini crawlers, the MC285, MC305 and MC405. Maeda also produces the CC1485 crawler crane that has a capacity of 6.6 tons.

“This rooftop job highlights the unique benefits of the Maeda mini cranes,” said Tony Inman, president of Inman Texas. “Offering economical solutions to the most extreme unconventional lifting situations, Maeda is a new tool for the toolbox. Lifting on a rooftop and being removed from the building by elevator – conventional cranes can’t do that, but the Maeda mini crane can.”