Miller Transfer made a complicated haul of stainless steel vessels weighing up to 80,000 pounds look easy.

When a customer approached Miller Transfer about transporting several stainless steel vessels that weighed from 57,000 pounds up to 80,000 pounds and measured between 73 and 93 feet long, what others may have seen as a tight squeeze was viewed as an opportunity. 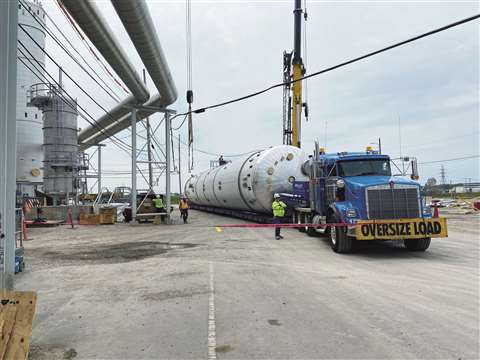 “Our project management team worked alongside a fully engaged customer to develop a plan that included police and private escorts, numerous county permits and a wrecker crew to assist with tight turns was put into motion,” said Miller Transport’s David Cochran.

To manage the wide load, a 75-foot trailer deck was employed. The vessels were loaded onto the transport system using two all-terrain cranes rigged with a spreader bar system to keep them level. They were offloaded in the same manner.

Two transport systems were used. For the 75-foot vessels the transporter was configured with a 13-axle Nelson Manufacturing trailer. For the 93-foot transport system, a Highway Max Faymonville trailer was used.

The Faymonville trailer was a new purchase that we just put into service,” said Cochran. “It handled it perfectly.” 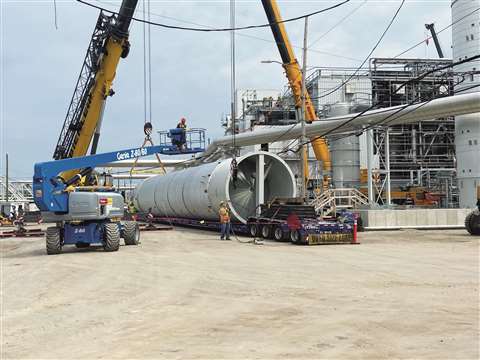 At one point the transport system had to travel in reverse for five miles.

The vessels had predesigned lashing points to assure they were safely secured to the transporter. The route included a narrow stretch with a significant turn that required the transporter to travel in reverse for a five-mile stretch.

Challenges included construction zones, hours of operation, along with multiple sharp turns that had to be carefully navigated. The route would wind through Ohio and Michigan and take a total of four days. It was another successful collaboration between a great customer and a dedicated team of transportation specialists, Cochran said.