Over the road, the route from Ashtabula, OH to Mobile, AL is about 1,200 miles. Driving straight through, it would probably take about 16 hours to make the trip. 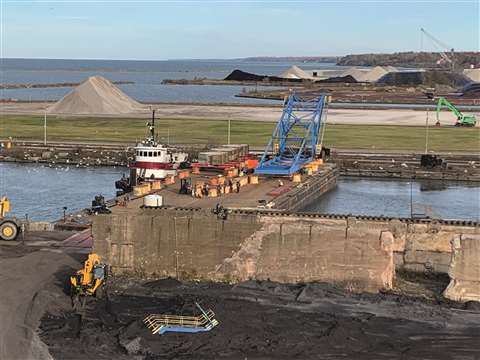 OH-based PSC Crane & Rigging played a key role in the rigging and transport of a giant port stacker-reclaimer that weighed about 950 tons.

However, if you had to navigate that trip by river, sea, ocean and gulf waterways, and if you were transporting a huge stacker-reclaimer machine, well that’s another story. You would be talking about a 3,500-nautical mile journey that would span several weeks, depending on the weather.

Last October, the Alabama State Port Authority purchased a used Krupp Stacker-Reclaimer from the Ashtabula Dock Company in Ashtabula, OH. A stacker like this is used to handle and stack bulk materials into large piles, such as limestone, coal and grains. The reclaimer then recovers the material being moved. In Ohio, this particular machine stacked and reclaimed coal. Once it is refurbished and installed, it will also move coal at the McDuffie Coal Terminal in Mobile, AL. 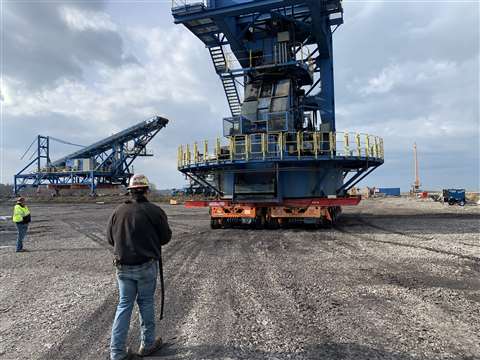 The main piece was lifted using a Manitowoc MLC 300 at the Port and lashed to PSC’s Goldhofer self-propelled modular transporter (SPMT). Because SPMTs are modular and their axles can be independently steered, the deck could be raised or lowered to allow a level transport across barge ramps.

Ohio-based PSC Crane & Rigging played a key role in the rigging and transport of this giant piece of machinery that was reportedly built in 1991-1992. This particular machine weighs approximately 950 tons fully assembled, standing at a height of nearly 100 feet tall and 335 feet long.

Simply put, the scope of work for PSC was to see through the multi-modal relocation of the stacker-reclaimer. But what that involved was not simple: disassembling the machine into logical parts, securing it to a barge, determining the best route, transporting it via barge to Mobile, receive and offloading in Mobile and transporting the components to a staging area for further restoration. 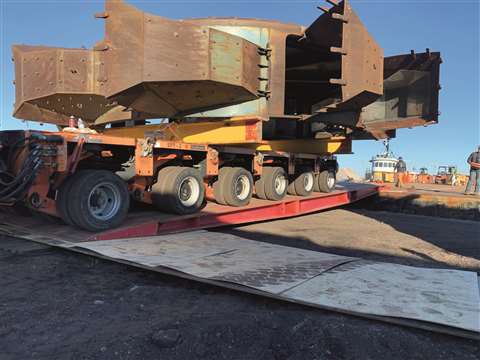 The stacker-reclaimer was disassembled into four pieces for transport by barge to the Port of Mobile, AL.

According to PSC’s project manager, the first issue was figuring out the best route for moving the machinery and determining the safest and most practical mode. The largest components would need to travel via barge, as they were too large for over-the-road transport. In order to make it to the final destination, the barge would need to travel north via Lake Erie, the Niagara River, Lake Ontario, St. Lawrence River, through Quebec City and through the St. Lawrence Seaway. It would then finally turn south via the Atlantic Ocean, around the southern tip of Florida and through the Gulf of Mexico to the Port of Mobile.

With the barge route determined, the machine was disassembled, and the smaller parts were inventoried and prepared for hauling to Mobile, AL over the road. PSC’s task was to assure the move was made safely and expeditiously. Some eight trucks hauled the smaller equipment components and parts.

For the tailing piece, which was the largest and most awkwardly shaped, PSC’s team had to make many special considerations. Because it was not level, PSC engineered a stand and beam system that was secured to the SPMT. This allowed the piece to be level for transport.

After the machine was disassembled into six large pieces, they were prepared for barge shipment. The main components were lifted using a Manitowoc MLC 300 at the Port and lashed to PSC’s Goldhofer self-propelled modular transporter (SPMT) to roll onto the barge for placement.

For the tailing piece, which was the largest and most awkwardly shaped, PSC’s team had to make many special considerations. Due to of the unique center of gravity, PSC engineered a beam and stand system that was secured to the SPMT. This allowed the piece to be level for transport. PSC used 12 lines of its Goldhofer transporters with two power packs.

A third-party engineering firm worked with PSC to determine the barge lashing plan. Because the route was considered a “blue water” transport, much more lashing and load securement was required. 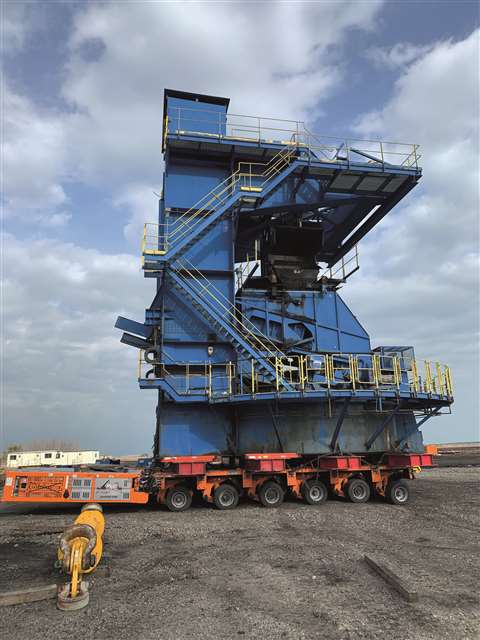 The stacker-reclaimer parts were rolled off the barge and transported to a staging area at the Port of Mobile. Since it arrived it has been undergoing restoration and reassembly.

The barge left Ashtabula mid-November 2021. Winter weather delays cost the trip about 20 days. The barge could not travel in high winds and ocean swells in excess of eight feet. The barge pulled into the Port of Mobile mid-January 2022. Once the barge arrived at the Port, PSC’s team was there to receive and begin the offload operation.

The stacker-reclaimer parts were rolled off the barge and transported to a staging area at the Port of Mobile. Since the stacker-reclaimer components arrived, it has been undergoing restoration. When completed, it will be installed at the 550-acre McDuffie Coal Terminal, where all sorts of cargoes are unloaded. The terminal is outfitted with a 16-mile conveyor belt system, two ship loaders, three ship unloaders, two barge unloaders, two bi-win stackers, two rail car dumpers five stacker reclaimers and a rail car loading station. When it is complete, the Krupp Stacker-Reclaimer will be capable of reclaiming coal at 5,000 tons per hour and stacking at 3,000 tons per hour.