It is the fourth unit built and Liebherr claims it as the most powerful conventional crawler crane in the world. Family shareholders Willi Liebherr and Sophie Albrecht handed over the new giant to the Russian energy company.

Energy company Titan-2 gave three reasons for choosing the LR 13000. First was given as the crane’s mobile lifting capacity for its compact dimensions. Liebherr said it is the only crawler crane in this size class which can operate without derrick ballast, a major benefit when space is at a premium. Reliability was cited as a major positive for the Russian company and, third, the relationship between Titan-2, Liebherr-Russland and the manufacturer in Ehingen, Germany.

Titan-2, which marked its 25th anniversary in March 2020, employs more than 10,000 people. It is active in a number of sectors, including construction of nuclear power plants and combined heat and power plants, in addition to oil, gas and chemical plants. Over the next ten years, the LR 13000 is destined to help construct a nuclear power plant in Turkey. 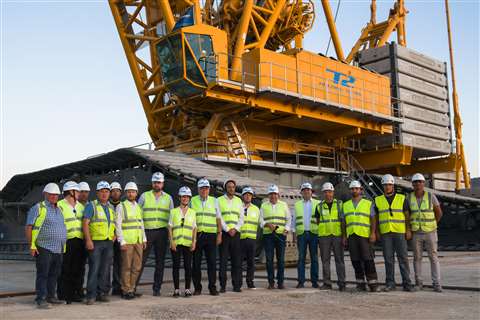 Willi Liebherr and Sophie Albrecht at the ceremony to hand over the LR 13000. They are pictured with representatives from Russian customer company Titan-2 and Liebherr-Werk Ehingen board members