The tower crane was working on construction of a 25-story residential building slated to be finished in October2021, according to news reports.

As it was being dismantled, a tower crane collapsed in downtown Kelowna, British Columbia, Canada, on Monday July 12th, killing five and injuring others at the highrise jobsite. Evacuations were ordered in a 250-foot (76 meter) radius of the crane. As the crane buckled, boom sections were strewn over several adjacent buildings, according to news reports. The incident is now being investigated by several Canadian entities. 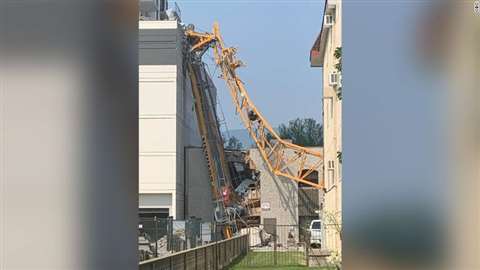 Harry Bains, Canada Minister of Labour, issued a statement offering condolences to the families, friends and co-workers of the victims.

“All workers have the right to a safe and healthy workplace – even one injury or death is too many,” Bains said. “This is a heartbreaking reminder that we must strive to ensure the safety of all workers to prevent incidents like this from happening. I thank the emergency personnel and investigators now on scene. Agencies, including WorkSafeBC, the BC Coroners Service and the RCMP, are now investigating. We will have more to say as further details become available.”

The crane had been working on a 25-story condominium project being built by the Mission Group. About 100 people were working on the jobsite when the crane collapsed. The crane was reported to be owned by another company, not Mission Group.

Last week another tower crane incident occurred in Toronto, causing damage to a rooftop but no injuries. The crane’s counterweight fell to an adjacent rooftop, according to news reports.