US premiere for Wolff 700 B 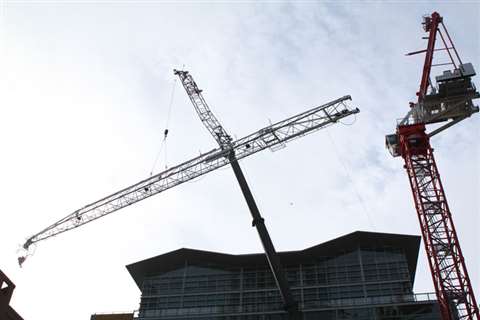 The Wolff 700 in downtown San Francisco

The crane was rented from Maxim Crane Works and is the first of its kind in the United States. The electric crane has a 50 tonne lifting capacity in 3-fall operation and a maximum tip load capacity of 16.5 tonnes at a jib radius of 50 m. It has been configured with 7.6 m counter jib.

The tower crane has 2.3 m Wolff HT 23 tower sections, a maximum hoisting speed of 190 metres per minute and a stepless, frequency-controlled drive. It also includes the Wolffkran patented, semi-automatic re-reeving mechanism which simplifies changing between the 1-, 2- and 3-fall operation, the manufacturer said.

Tasks for the 700 B include lifting a support column which weighs just over 45 tonnes at a radius of 14 m. During the project the 700 B will be climbed externally alongside the building to a final tower height of 233 m. It will be tied to the building ten times. It has secondary brakes for the hoisting and luffing gears or the option of adding an auxiliary winch and hoist, the manufacturer added. It is compliant with the American ANSI standard for tower cranes and only minor modifications need to be made to the electrical system to adapt it to the American UL standards Wolffkran said.