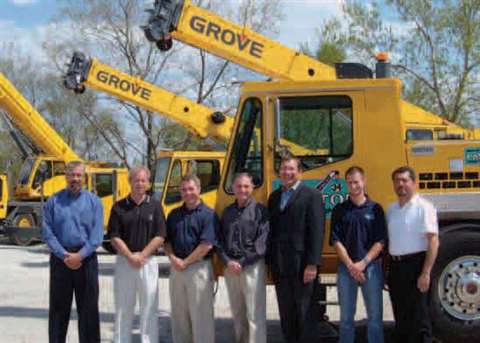 Abrief history lesson teaches us that we should not be surprised by WPPE's rapid success. The company is 50% owned by Mi–Jack, which had a thriving construction equipment distribution business across the Midwest in the 1990s. It focused on lifting equipment: cranes, boom trucks, forklifts and aerial work platforms, representing brands such as Terex, Condor, Simon Aerials, Gradall and Broderson.

Eleven of the 12 branches operated under the Mi–Jack name and were wholly owned. The twelfth, on the north side of Chicago, operated as Walter Payton Power Equipment established in 1993 in 50/50 joint venture with former Chicago Bears legend Walter Payton. Mike Lanigan, 52–year–old son of the Mi–Jack founder and current president, had been a friend of Payton since his playing days.

In the late 1990s the business climate was changing. Nationwide rental companies, backed by investment capitalists, were consolidating the industry. The manufacturers, too, were consolidating and finding new routes to market. The pure distributor was under threat.

When United Rentals came knocking in May 1999, Mi–Jack was happy to sell its construction equipment business, including WPPE. “Because of the consolidation, competition was getting fierce,” explains Mike Lanigan. “We didn't feel we were ready for that kind of fight. With all the large companies on a buying spree, we could get a premium for our business, which we did.”

Mi–Jack agreed to a standard, three–year non–compete clause. It used that time, in part, watching the industry from the outside, and learning. “Over the last five–and–a–half years we have observed how the big public companies run. We saw there was room in the market for a privately–held company to make a more personalised dedication to customers,” Mike Lanigan says, adding that when you use your own money, you tend to keep your focus a little better and try a little harder.

In December 2003 Mi–Jack decided to get back into the crane business, reviving the name Walter Payton Power Equipment. Th is time Mi–Jack is in joint venture with Matt Suhey, a Chicago Bears team mate of Walter Payton.

“When people found out I was getting back in the crane business, they thought I was crazy,” Lanigan says. There were two driving forces. The first was “the family always had a passion for cranes”. The second, more rational reason, was that he had secured the exclusive distribution rights for Manitowoc and Grove cranes in northern Illinois and Michigan. Lanigan says he made the approach to Manitowoc. “I think they were talking to many people but they were intrigued by our history as a successful crane dealer.”

Gleason Cranes, the legendary Grove dealer (based in Illinois but with a worldwide reputation), had closed its doors in 2002. The Grove account had been taken on by North Central Cranes, the Manitowoc dealer and Manitowoc's last, remaining company store. Manitowoc did not want to be in the distribution business.

Getting the account of both Manitowoc lattice boom cranes and Grove hydraulics was the perfect opportunity to get back into cranes, Lanigan says. “Mi–Jack never had the top hydraulic lines. When you've got the best lines available, the future looks brighter,” he explains.

The new Walter Payton Power Equipment business is a melding of Mi–Jack's old distribution business with Gleason and North Central Cranes. There is no shortage of experience, expertise and industry knowledge.

General manager is Bob Johnson, who joined Mi–Jack in 1985 as a sales co–ordinator and was the first employee and general manager of the old Walter Payton Power Equipment. He went to United Rentals for a year as part of the acquisition but rejoined Mi–Jack in 2000, looking after reach–stacker sales until WPPE was back up again. At his side are Phil Rice, Ken Martinek and Mike Kearney from Gleason.

Lanigan is well aware of the Gleason heritage. Founder and owner Bob Gleason died in August 2004. “Bob was a good friend. We competed with Bob for many years but we were friendly competitors. My father respected him to the utmost, and so did I.”

There's also Phil Wichowsky, formerly with Terex dealer Crane and Machinery, and former Mi–Jack employee Mike Meagher, both of whom work in sales.

With this team in place, WPPE was ready for the upturn of the hydraulic crane market.

“We started out slowly as, frankly, the market wasn't there,” says Bob Johnson. In January 2004 they took what he describes as a gamble (“With the Lanigans’ money”, he says.) and ordered “the entire Grove line and some Manitowocs”. The gamble paid off, he says.

Johnson says that a variety of the German–made all terrains have also sold, ranging from the Grove GMK3055 at the bottom, to the top of the range seven–axle, 550 ton–rated GMK7550. The latter was bought by the Grand Davo rental company in Michigan.

The lattice boom crane market remains slow in the region. Mike Lanigan says this has not been a surprise, and he is optimistic that turnaround nears. “We think crawlers will come back in Illinois and Michigan in early 2006,” he explains.

Johnson elaborates: “We've been quoting quite a few but finding competition from our own product line–2250s and 999s–sitting in rental companies’ yards.” He detects change here though. “If you look at auctions, used equipment prices have started to go through the ceiling.” Th is is a strong indicator that demand for new machines will rise.

Although the larger Manitowocs have been a tough sell in the first 18 months, the smaller ones “have had a bit more movement. In fact, we sold a 12000 Manitowoc this morning,” Johnson says. These smaller Manitowocs are from Kobelco in Japan and badged by Manitowoc under an OEM agreement that delights distributors like WPPE.

WPPE also has the Gradall line in Illinois and three counties of Indiana, Lull in Michigan, and Broderson in all its territories, though the Manitowoc and Grove lines will always represent its core business, Johnson says.

He has also been exploring Potain tower cranes. “I believe the self–erector has a lot of potential. They're the new frontier,” he says.

One direction WPPE will not take, however, is the rental business. It will remain a pure distributor–“though that's not to say we won't offer rental/purchase options,” Johnson says. “We've made a business decision not to compete with our customers.”