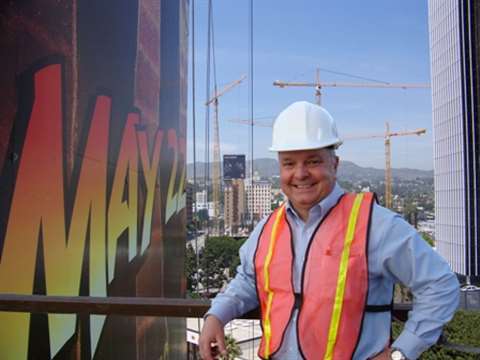 Editor's Note: Peter Juhren will be a speaker at International Tower Cranes 2012 October 11 in Berlin, Germany. His topic will be: Driving safety through training and quality assurance: The US experience. For more information please visit: http://www.khl.com/events/itc2012/

As corporate service manager for Morrow Equipment Company, Peter Juhren travels near and far, overseeing the company's global service operations. Besides managing Morrow's service department operations and personnel around the world, he also directs the spare parts department, an extensive operation that warehouses and ships parts for every piece of equipment Morrow owns. He also oversees the company's purchasing department for inventory, supplies and support equipment.

And if that weren't enough, one of Juhren's most important and engaging jobs is handling the operation of Morrow's state-of-the-art training center, a 10,000-square-foot facility located at the company's headquarters in Salem, OR. He assists Morrow's corporate safety director in developing and implementing policies to ensure a safer work environment and code compliance, and liaisons with governmental regulatory bodies.

Juhren has been in the tower crane business since he was 22, when after graduation he began trying to decide what to do as a career. "I took a temporary job cleaning up the shop with American Pecco in Millwood, NY in October of 1980," he says. "I soon became fascinated with the tower cranes, and with the help of a great mentor, Gerhard Langer, I moved to a field service technician position in January 1981."

He went on to manage the service operations of several district offices around the country for American Pecco, starting in San Francisco in 1981, New York from 1984 to 1990, and then Atlanta from 1990 to 1994. In November 1993, Morrow Crane and American Pecco merged, and he has been corporate service manager for Morrow since then.

Juhren has immersed himself in the business of tower cranes, working closely with tower crane manufacturers regarding product improvements, quality and new product development. Due to his longevity in the industry and knowledge of the tower crane product, he has been a dutiful volunteer in organizations such as the SC&RA, NCCCO and OSHA to establish tower crane operator certification and enhance tower crane safety. We caught up with Juhren in July to talk about what is going on in the tower crane industry.

What is the most challenging part of your job?

In my position I face many challenges daily. In recent years, the changes regarding regulations have had a major impact on everyone in the industry. Keeping up with these changes presents challenges regularly as states continue to implement their own programs, and everyone is adapting to the new OSHA regulations that became effective November 2010.

Morrow developed a comprehensive QA/QC program three years ago in order to improve the quality of the machines we provide to our customers and to ensure we are in compliance with these new regulations. Ensuring that we have a trained and qualified support staff for our customers is an on-going challenge as the demands of the industry change accordingly.

We have a continuous training program for all of our staff to ensure they are up to the newest challenges both with the equipment and regulation compliance.

Tower crane safety sometimes appears to be a bigger issue than crawler or mobile crane safety. Why do you think this is the case?

I don't believe the issue regarding safety with tower cranes is a bigger one than encountered by other types of cranes. The environment in which tower cranes operate, such as densely populated urban cities, coupled with the extreme heights they achieve, magnifies the impact and damage when a catastrophic failure occurs.

Historically, a tower crane collapse results in multiple deaths and severe property damage. Categorically, mobile cranes have a much higher incident rate but do not usually result in the same magnitude of destruction.

After a string of high-profile accidents involving tower cranes in 2007 and 2008, the industry has gone through a major change in both regulations imposed on the industry and conscientious companies looking to eliminate risks within their organizations and improve overall safety. The most important factor here is to ensure you have a trained and qualified workforce and that every operation and procedure is carried out correctly without cutting corners in the interest of time.

You were a part of the team that developed NCCCO's Tower Crane Operator certification program. Has the program met its goals? Are recertification rates as high as was expected?

The Tower Crane program has surpassed the goals originally envisioned. When you consider the population of working tower cranes in the U.S., there are approximately 3,000 CCO-certified tower crane operators registered.

Currently the recertification rate is about 70 percent, which is above industry standards and continues to remain positive. In 2008, New York City required CCO-certification for operator's Class "C" license, and recently has added the program as the basis for its Class "A" and "B," which tower crane operators fall under.

The upcoming November 2014 mandatory requirement by OSHA that all crane operators be certified will have an impact as well, and the anticipated last minute rush for operators to meet this deadline will see a marked increase similar to that seen in California in 2004-2005 when certification became mandatory.

The tower crane market was hit hard by the economic downturn. How do you characterize the market at this time? Has the market fully recovered?

This was the most dramatic downturn ever seen in this industry, which resulted in the failures of several major companies in the tower crane industry in the United States.

In addition to the reduction of utilization, rental rates dropped substantially as companies competed for the little work there was.

Currently the market has seen a slow return, and utilization has improved steadily over the past 12 months, but is still not near healthy levels.

Rental rates have stayed depressed and have not risen proportionately to the increase of utilization, and sales of new cranes are, for the most part, nonexistent with the glut of used cranes still on the market.

The West Coast of the United States is seeing a marked return as well as the Southeast, particularly Texas, which remained relatively active throughout the downturn. The Midwest and Northeast regions are still soft.

We believe that the market should continue an upward trend in 2013 as long as the economy continues to improve and does not fall back into a recession.

You are very active in NCCCO and with ASME B30 committees. What do you do for these groups and why are you involved in them?

As a company, Morrow is committed to a safe industry and using the expertise we have to improve safety nationwide by participating with organizations and governmental agencies dedicated to making the industry safer. Morrow has been a financial supporter of the program from the beginning, and we continue to support this organization.

In 2003, I joined the NCCCO Tower Crane Task Force to develop the program, and currently I am a member of the Tower Crane Management Committee, which manages and continually updates the program. I am a past commissioner and currently sit on the board of directors for NCCCO.

Both of these organizations are dedicated to creating a safer work environment, and I believe the ongoing commitment of experts and professionals in the industry dedicating their time voluntarily with the financial support of companies such as Morrow to enhance safety and increase awareness will leave the industry better than when we first walked into it.

What is it about the tower crane as a lifting machine that is interesting to you/intrigues you?

I find tower cranes just as fascinating today as I did when I started in this industry 32 years ago. The concept of the entire working parts of the crane at the top and the balancing act required to maintain stability intrigues me.

The ability to take a crane, erect it on a small footprint, and be able to climb by itself without another assist crane as high as the structure it is building, then climb itself back down is ingenious.

The changes in technology are also fascinating. Today the control systems are PLC controlled with variable frequency drives, and sensors instead of limit switches. I've been fortunate to see this technological progression over the years, and I'm sure more is in store in the future.

What do you like to do when you are not working or volunteering your time to tower crane safety?

I'm not sure anyone in the crane business is ever not working, but I do enjoy playing golf to relax. I also enjoy restoring old cars like the 1969 Ford Mustang I did with my two sons a few years back.

I recently took up cycling which is also a great stress reliever, and I am in the process of crossing off one of my bucket list items and taking flying lessons for my private pilot's license. I have wanted to fly planes since I was in my early teens and life just seemed to speed by.