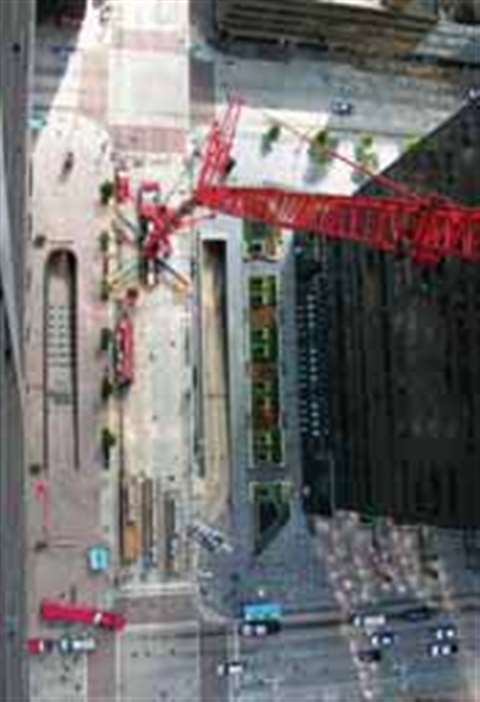 Crews worked around the clock for 48 hours to remove the old chiller and lift the new one, which was separated into three pieces, into the side of the El Paso Energy building in downtown Houston

When it comes to challenges, TNT Crane faced a whopper of a task in late September. The company was called on to replace a centrifugal-type chiller unit in the El Paso Energy building in downtown Houston. In three pieces, the largest component weighed 16,200 pounds and needed to be lifted to a height of 443 feet in order to be skated into the side of the building to the mechanical room in which it would be installed.

“It was a logistical nightmare,” says TNT's Herb Cryar. “The good thing is, we were working with an expert mechanical contractor, Gowan Mechanical. It required quite a team effort with Gowan, us and El Paso Energy.”

After assessing the job requirements, TNT decided the best machine for the job would be its new 800-ton Demag AC 700 hydraulic crane, which Cryar says is likely the largest hydraulic truck crane in the Southwest. “It performed beautifully,” he says of the crane.

Preparation was the key to the success of the job, Cryar says, with the three entities working together to decide that the project would require an entire weekend of work. Th ree city streets were blocked off starting on a Friday night about 10 pm. TNT's 100-ton AC 80-1 Demag was brought in as an assist crane to set up the counter weight and boom, and then to boom up the 800-ton Demag.

“You had to set the crane up in the exact right spot within feet, if not inches, in most cases,” he says.

The crane was rigged with 480 feet of boom, leaving head room of just 19 inches. “The crane wasn't set up at maximum boom but it was maximum boom amount for the weight we had to pick,” says Cryar. “The crane's capacity with this boom configuration and radius was 21,000 pounds, leaving a good safety factor.”

The old chiller was demolished in three sections in the mechanical room, with the crane first removing the old pieces of equipment. The real challenge was lifting the new chiller components and then threading them into a double doorway in the side of the building.

“There was a deck that comes out on the side of the building approximately 12 feet,” says Cryar. “We put down a steel plate on top of the deck in order to receive the units. The deck above the opening kept us from being able to swing and set them down. We hooked up winches and come-alongs, once we got them to the elevation.”

The chiller components were hoisted using chain falls and nylon slings. Once the units were at the 34-story height and securely on the deck, they were placed on skates and skated to the foundation in the mechanical room. Due of the weight of the units, each one had to be moved to the foundation separately.

The crane operated at a 133 foot six inch radius with 148 feet of main boom and 295 feet of luffing jib. Cryar says that is as high as they have ever worked the crane since they took ownership of it last February. “We do have another increment of jib to give it the maximum 316 feet of luffing, but with this particular job, we couldn't handle the weight of the chillers at that height.”

From the time they started setting up the crane, to the time the job was completed, spanned some 48 hours around the clock. Operators and rigging personnel worked 12 hour shifts, a fresh crew coming in to relieve the old one. The goal was to be complete and out of the way before the Monday morning rush hour.

As for the big crane used on the project, Cryar says it has been a wonderful addition to TNT's fleet. “I think since we received the crane and tested it in our yard in February, the machine hasn't been back to our home base for maybe five to 10 days total,” he says. “It has been continuously on the road and continually on heavy lifts around the area.”