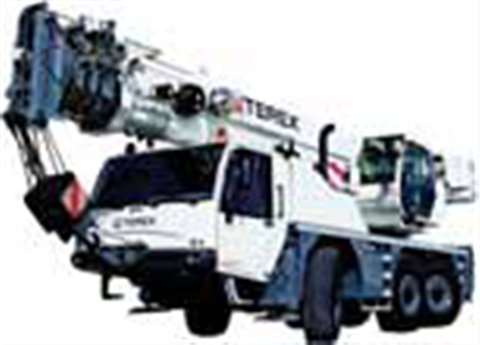 Terex-Demag has announced upgrades and improvements to its AC 55, renaming it the AC 55-1. Alterations to the crane include a new boom telescoping system that reduces the axle loads and enhances lifting capacity. The new crane has a maximum lifting capacity of 65 tons at a radius of 8.5 feet, approximately 20 percent more lifting capacity than the AC 55.

According to Terex-Demag, setup time for the AC 55-1's fully hydraulic boom is 50% less than that of a pinned boom, and the boom can be telescoped under load. Lifting capacity is increased the most on longer combination lengths at medium operating radius. A new option is a 26 to 49 foot hydraulically offsettable boom extension that can be controlled from the operator cab under full load. This option is also available on the AC 35, AC 35L and AC 55L.

The new AC 55-1 will be on display for the first time at the April 2006 Intermat exhibition in Paris. Production is set to start in the spring.