Two records were set at the ICUEE 2019 tradeshow in Louisville, KY October 1-3 at the Kentucky Exposition Center. Registered attendance topped 19,000, from the United States, Canada and more than 65 other countries worldwide. Record 90 degree temperatures made the outdoor portion of the exhibition feel like summer, rather than early fall. 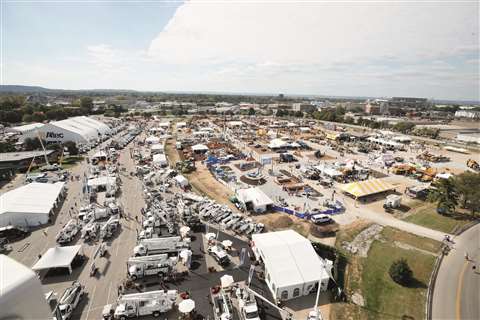 ICUEE 2019 will be remembered for its record attendance and scorching hot temperatures.

“We shattered our attendance record on Tuesday,” said John Rozum, ICUEE show director. “Our 70 registration kiosks were printing 25 badges per minute between 8 and 10 a.m., so we knew the temperature wasn’t the only thing running hot that day and breaking records.”

ICUEE 2019 included over 1,000 exhibitors showcasing the latest products and solutions for the utility construction industry. Exhibitors covered a record 1.34 million square feet or more than 30 acres.

“By all measures, this was an outstanding ICUEE with more to see and experience than ever before, and it was gratifying to see such positive energy among attendees and exhibitors,” said Rick Johnson, ICUEE 2019 show chair and CEO Emeritus of Charles Machine Works.

ICUEE 2019 featured a new equipment demonstration area, new and expanded education programs and new networking opportunities. ICUEE also looked to attract the next generation of workers. A new career skills event brought hundreds of high school students to the 2019 show to interact with exhibitors and learn about rewarding industry careers. AEM, show owner and producer, partnered with Bridging America’s Gap on the event, which included hands-on learning stations, talks with industry professionals and tours of the show floor.