Hannah Sundermeyer rounds up a variety of power plant projects around North America.

As our world and the technology that powers it evolves, specialized rigging companies are key players in a variety of intricate and uniquely demanding projects in the realm of building and expanding power plants. These facilities often showcase heavy lift and rigging expertise on high dollar projects. Power plants provide a distinctive set of challenges as space is often limited, site conditions can be uncertain and safety is always an issue. These types of projects require a keen eye and strategic planning, as mighty machines and rigging gear are put to work in delicate environments. 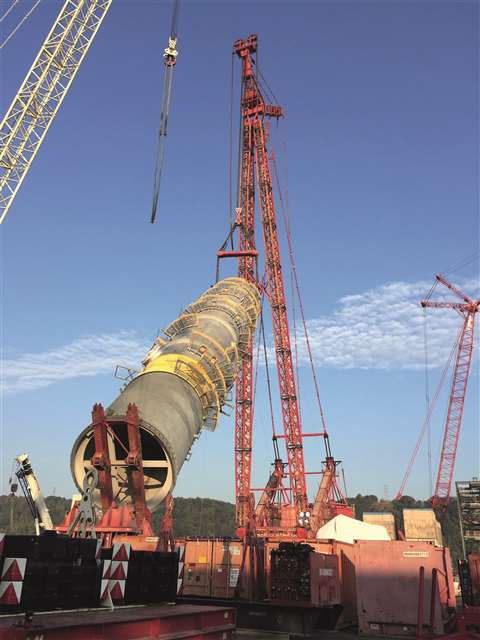 Mammoet safely completed a critical lift at Shell’s Pennsylvania Chemicals Project in Potter Township, PA, utilizing its MSG 80 ring crane to hoist into position a 2,000-ton quench tower. The new ethane cracker plant is the first major U.S. project of its kind to be built outside of the Gulf Coast region in 20 years. Once operational, the facility will boast an ethane cracker and three polyethylene units and is expected to employ up to 600 workers. As part of its heavy lift scope, Mammoet recently lifted the tallest and heaviest piece, the quench tower, into place using its specialized MSG 80 ring crane.

The quench tower, measuring 285 feet long, was erected according to plan within a 12-hour time period. It was one of the first vertical pieces to be set on site. Due to the restricted availability of space, the MSG 80 was the only crane with a small enough footprint and high enough capacity to complete this crucial lift. Additionally, Mammoet’s PTC 200 DS is on site and is scheduled to complete a further 45 lifts for the project.

The success of the lift was a result of Mammoet’s specialized equipment combined with a highly skilled team of people, the company said.

“This scope required extensive planning and mobilization within an intense schedule,” said Tim Dowdle, project manager, Mammoet. “Working in close partnership, the Mammoet and Shell teams stepped up to the plate, accepted the challenge and delivered a safe, flawless execution.”

NessCampbell Crane + Rigging was contracted to assist with the assembly of a new 585-ton capacity emergency gantry crane for the Army Corps of Engineers on the John Day Dam, a hydroelectric dam about 100 miles East of Portland, OR on the Columbia River. This gantry crane is intended to better serve the ever-changing energy needs that John Day Dam serves. Its current gantry crane is due for decommission once the new gantry is assembled and ready to work. 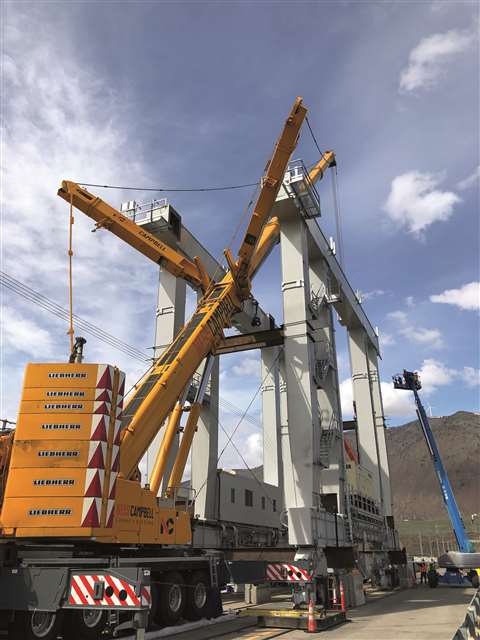 NessCampbell Crane + Rigging’s Liebherr LTM1400-7.1 was configured with its full 308,600 pounds of counterweight and Y-Guy attachment to hoist all components of the new gantry crane.

NessCampbell Crane + Rigging’s Liebherr LTM1400-7.1 was configured with its full 308,600 pounds of counterweight and Y-Guy attachment to hoist all components of the new gantry crane as they were transported onto the dam. The heaviest components of the gantry were in excess of 110,000 pounds. The adjustable counterweight extension modes and retractable Y-Guy of the Liebherr LTM1400-7.1 made it a perfect match for the small work area on top of the dam, the company said. NessCampbell’s operator, Mike Ballinger, worked closely with the customer to come up with time-saving approaches to the logistical challenges of building such a large machine in a small area.

While severe winds are always a challenge in the Columbia River Gorge, this project only suffered two wind-out days and the project completed earlier than the customer predicted.

After months of preparation, Bragg Companies and Bragg Crane & Rigging completed the execution of the renovation of a turnaround at the Torrance Refinery. Bragg Companies was entrusted with the mechanical work for the KOBE exchangers, APH, crude unit exchangers, coke barn repairs and general turnaround support. Bragg’s new state-of-the-art 60-80 Hoist Truck allowed the crew to use new technologies, all while getting back to the basics and maintaining Bragg’s core values, the company said.

Iron workers, boiler makers and operating engineers used new aerial extractors, combilifters and self-propelled extractors to install blinds after cleaning equipment for maintenance. During the turnaround, mechanics, crew members and welders worked together to get the plant up to a full operation mode. Mechanics worked on the technical components alongside welders as they replaced valves and alloy welding, while the crew prepared lines for maintenance needed for the quality assurance quality control. The crude section of the refinery relied on the crew to reinstate multiple crude unit exchangers by replacing channel heads and dollar plates to reinstall bundles. Further in the plant, the support unit executed a vast amount of work in the alkylation plant. The crew received extensive training due to the high-risk environment to don the right P.P.E in this unit. Another crew repaired and retrofitted the coke barn, a task that required an expert field layout, fabrication and installation. Extensive training allowed Bragg Crane & Rigging to work over 50,000 man hours all while completing the turnaround, before scheduled timing. 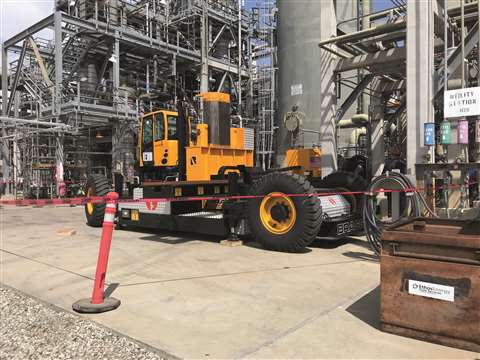 During Bragg’s turnaround project at the Torrance Refinery, mechanics, crew members and welders worked together to get the plant back to full operation.

Barnhart developed and executed a strategic plan to attach rigging and cut the conveyor sections free from the support piers at a coal plant in Georgia.

A project in Georgia involved the dismantling of a coal-fired power plant. Barnhart had to provide engineered plans, supervision, trained personnel and the appropriate equipment to rig and remove four coal conveyor spans and two pipe bridge spans and stage on grade to be demolished at a later time. The ground conditions and calculated ground bearing pressures were a major concern during the project. The tests were conducted at each crane set-up location and it was determined that the existing bearing capacities were not suitable. Barnhart’s engineering team worked with a geological engineering firm to design adequate crane pads for each set-up location.

The coal storage facility had been on the opposite side of a waterway from the power plant. The 370-foot-long conveyor spanned this public body of water. No materials or debris were allowed to fall into the water during any stage of the project, which include cutting, hoisting and rigging.

The heaviest conveyor section was 110 feet long and with rigging weighed 300,000 pounds. The main machine utilized by Barnhart was a Liebherr LR 11350, which features a maximum lift capacity of 1,488 tons, a main boom max length of 492 feet and a max jib length of 375 feet. Barnhart developed and executed a strategic plan to attach rigging, cut the conveyor sections free from the support piers and complete each lift safely and with no environmental issues. It was a challenging project that resulted in a very satisfied customer, the company said.

A 2,600-ton class Lampson Transi-Lift 2600 2BC configured with 400 feet of main boom was leased by Southern Nuclear Operating Company in 2017 to assist in the construction of the Alvin W. Vogtle Electric Generating Plant Unit 3 and Unit 4 in Waynesboro, GA. The huge crane was delivered, assembled, tested and has been used to perform various lifts at both units over the past couple of years.

Loads between 50 and 1,000 tons have been lifted and set in various parts of the plant, with some larger lifts yet to come. Within a matter of three days, the machine can travel from one unit to the other, ready to lift. This includes reducing counterweight (if necessary), traveling the fully assembled machine and reloading the necessary amount of counterweight.

The Lampson Transi-Lift performed the 750-ton containment vessel top head lift in March 2019. The piece was lifted at a 184-foot radius, swung about 80 degrees and set at roughly a 165-foot radius.

The Lampson Transi-Lift performed a 750-ton containment vessel top head lift in March 2019. The piece was lifted at a 184-foot radius, swung about 80 degrees and set at roughly a 165-foot radius.

Mountain Crane Service was called in by Monsanto in Soda Springs, ID to replace a 150,000-pound transformer.

The new unit was transported with eight lines of a Goldhofer self-propelled modular transporter (SPMT) and then unloaded with a Liebherr LTM 1400-7.1 all-terrain crane. Mountain Crane then moved it into place with the help of a jack and roll crew.

The unit had to be rolled out of the building onto a structural platform three stories above ground. Mountain’s crew consisted of a certified crane operator, riggers, a Goldhofer operator and jack and roll specialists to execute the project safely and efficiently, the company said. “Everything was laid out ahead of time by Mountain’s skilled team of project engineers,” Mountain Crane said.

Mountain Crane Service was called in by Monsanto to replace a 150,000-pound transformer.