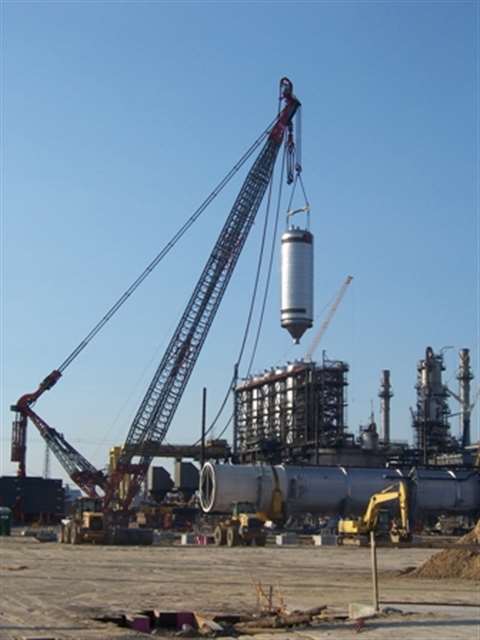 An AL.SK190 was used to complete a two-stage project that involved lifting 1,474 tons at 177 feet of outreach at a Texas refinery.

Global heavy transport and lifting company ALE has successfully demonstrated the key benefits of an extended lifting radius with a series of record-breaking lifts at an oil refinery in Port Arthur, TX. Using its AL.SK190 heavy lifting machine, ALE completed a two stage project that involved lifting 1,474 tons at 177 feet of outreach.

In the initial phase of the project, the AL.SK190 was used to exchange coker drums, removing six old drums and replacing them with six new drums weighing up to 519 tons each. The crane first lifted a 1,543-ton derrick structure, which was positioned on top of the existing coker drums at a height of 328 feet and set it on the ground. The coker drums were then exchanged, and the derrick structure replaced.

The derrick lift performed by the AL.SK190 was the first time a complete derrick assembly consisting of triple drill towers and cutting deck, had been removed and replaced in a single piece, according to the company. The lift required a complex tackle arrangement with a 12-point pick up.

To complete the project without shutting down the coker, the AL.SK190 was rigged outside the boundaries of the coker pit. This also enabled the completion of the project with no permanent equipment in the refinery having to be dismantled, and the coke pit wall did not have to be removed.

"This project clearly demonstrated the benefits of the AL.SK190's lifting radius - we were able to rig the crane off plot, meaning key aspects of the refinery remained operational during the installation," said John Trafford, operations manager, ALE. "No other crane in the world had the capacity to lift the derrick structure in one piece."

The crane was then relocated to the refinery's hydrocracking unit (HCU), where it lifted and installed eight pieces, including a 688-ton, 232-foot-high fractionator and three reactors ranging from 606 tons to 1,523 tons. In addition to the AL.SK190, ALE utilized a tailing gantry and 60 axle lines of SPMT to complete the HCU installation. ALE also supplied all of the engineering calculations and related support.