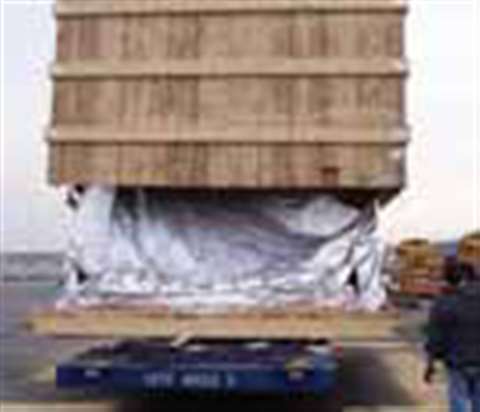 The crate and loose fitting tarp were removed

A few months back, Miller Transfer of Rootstown, OH was faced with the transport of a turbine rotor casing that arrived from overseas at the Baltimore pier. The 139,790 pound piece of machinery was 22 feet long, 15 feet wide and 12 feet high. The biggest issue for the company was that the crated unit was too heavy – permitting could not be achieved for the piece that was to be transported to Toronto, Canada.

“Basically, the piece was too heavy to get permits for,” says Dennis Moeller, general manager of Clarion Warehouse and C.W Shrink Wrap, subsidiary companies of Miller Transfer based in Dover, OH.

Moeller's team was dispatched to Baltimore to assess the haul and decide how to reduce the weight. “We ended up taking it out of the crate it was in, which eliminated quite a bit of weight, but it left the piece exposed.”

The sensitive machine part needed to be protected from rain, wind, salt and debris that it might encounter in route to its destination. Additionally, the piece would be stored and would be sitting for a certain amount of time, further increasing the need for it to be covered and protected.

“It could have been tarped, but that still leaves it open to the elements for a duration,” says Moeller.

The solution was large-scale shrink wrapping. The entire unit was encased in a fibrous plastic material that was then shrunk down to conform to the piece, he says.

“This is not a new process but it's something that we are offering as a part of our package program,” says Moeller. “We do a lot of export packaging and this service is part of it.”

Moeller explains that shrink wrapping large, oversized objects has a lot of advantages. Number one, it helps preserve and protect the material being shipped from moisture and anything that has the potential to contaminate it. “It is a longer lasting preservative than a conventional type covering,” says Moeller.

For the turbine rotor casing, this process offered a lot of merit, he says, because ultimately it reduced the weight of the piece of machinery. “With something of this nature, you are looking at an additional 5,000 pounds for crating versus 200 to 300 pounds for the shrink wrap.”

The process for shrink wrapping such a huge piece of equipment is just a large-scale version of how a smaller item would be shrink wrapped, Moeller says.

“You set the piece being shrunk wrapped on a piece of the 3M shrink wrap material,” he explains “You pull that up the sides and then you drape the same material over the top. Once it's all covered, through a heat application, you seal the two pieces together to make an airtight package, so to speak. Then you start at the top and apply the heat. The shrink wrap material is pliable and can take the heat. It shrinks down to conform to the piece so that nothing can lay on it. Water, ice or snow will fall off of it.”

For this particular piece, rust was an issue, especially while it was transit and being stored. The shrink wrapping solved this problem, as well as the weight problem.

“For this piece, they weren't going to install it right away so there was definitely a storage factor involved,” says Moeller. “The shrink wrap offered a cost savings because it prevented the need to have the piece in a building.”

Moeller says his company generally travels to the site to apply the shrink wrapping service. As well, optional elements are available to make the object being shrink wrapped easier to move. “We can install what is called 'doors,' in that the shrink wrapping has zippers so you can get inside the package in order to run chains through for tie down and securement purposes. You can crawl inside to attach chains and then crawl back out.”

Thus far, Moeller says there has been a lot of interest in the shrink wrap service and he has quotes out for equipment that is just now being built and will be transported months from now.

“We have put out a lot of quotes for some large motors and some electrical equipment and some presses,” he says. “Some of the stuff we are quoting hasn't even been built.”

He says shrink wrapping is especially popular for machinery and equipment being shipped overseas via seagoing vessel. He says his company recently shrink wrapped five smaller machines that were being shipped to India and China.

Often an exporter will want to shrink wrap a piece of equipment before it is crated in order to provide the air and water tight attributes. “Just shrink wrapping doesn't offer the protection of an object being hit or anything like that,” says Moeller. “We often do it in addition to crating because it keeps the salt water, dust, dirt and air out. No matter how you build your box, you can't make it air or water tight. Sea spray can always permeate a crate.”

The shipping industry has embraced shrink wrapping for certain types of sensitive electronics and other machinery. “It's especially good for machinery with wires, electronics or sensitive equipment,” he says.

Before shrink wrapping, Vapor Corrosive Inhibitors (VCI) can be placed inside, which impregnates the metal to keep moisture from attaching to it. “That is applied right before we seal it up,” says Moeller.

The cost of shrink wrapping is not prohibitive, and usually depends on the amount of time, the amount of material needed and the location of the item that needs to be wrapped.