American Crane Company was recently tasked with a tandem lift to pull a 16- by 68-foot (4.9 x 20.7 meter) vessel out of Lake Winnipesaukee in New Hampshire, USA. Needing an overhaul, the vessel known as MV Doris E was built in 1962 and historically carried mail and commuters from Lakeport to Weirs Beach in New Hampshire. The lift was performed by two Liebherr cranes that were purchased from Select Crane Sales – a LTM 1130-5.1 and a LTM 1220. 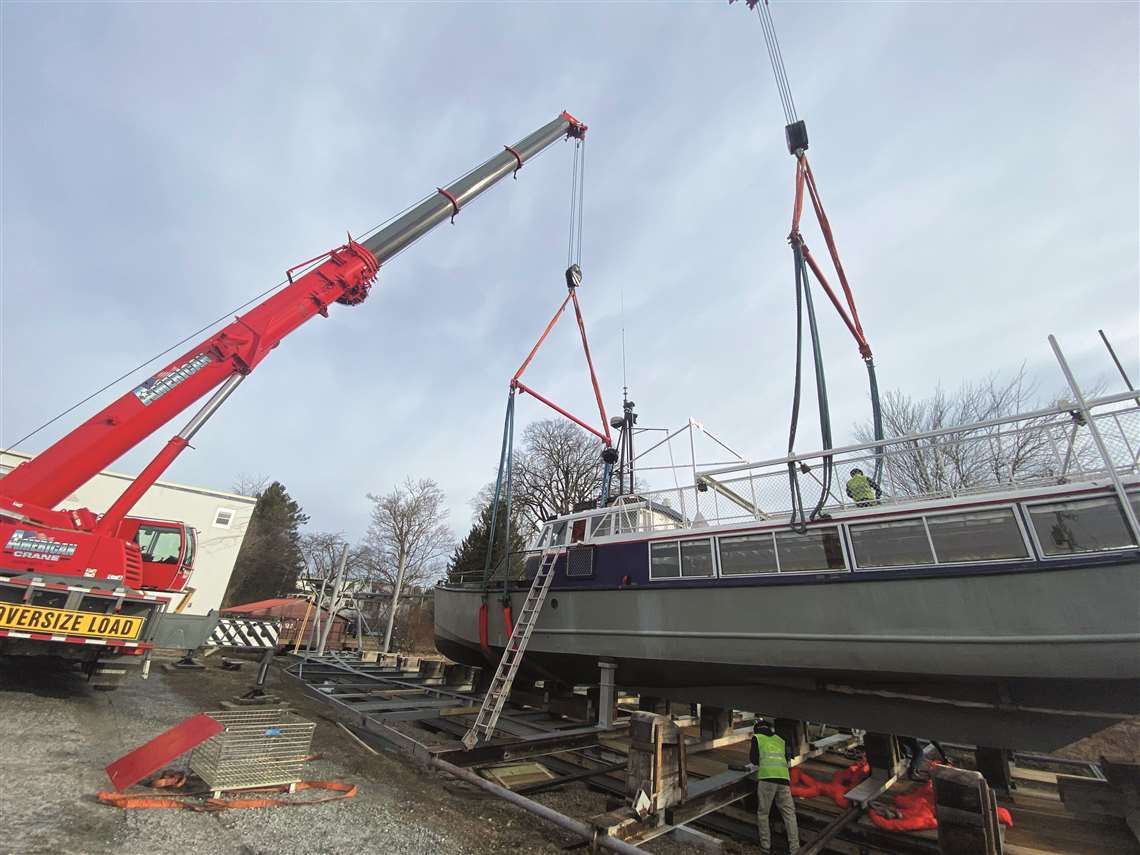 American Crane positioned the LTM-1130 by the bow of the Doris to ensure the team could maintain a 40-foot radius from picking to setting.

The Doris was out of the water at the time prior to the lift on a maintenance rail that the Winnipesaukee Flagship Corp. owns. The first order of business was the inspection and repair work necessary for the vessel.

The rail was designed to haul out the massive 750-US ton (680 metric ton) Mount Washington ship that also sails on Lake Winnipesaukee. During the time in which the Doris was out of the water being repaired, the American Crane team needed to free up the rail for the Mount Washington ship to be inspected. This is when the company received the call to relocate the Doris for further refurbishment.

“We positioned the LTM 1130 by the bow of the Doris to ensure we could maintain a 40-foot (12 meter) radius from picking to setting,” said Mike Lesniak, operations and company manager, American Crane Company. “The LTM 1220 was positioned near the stern of the boat with the same theory in mind to pick at 60 feet [18 meters] and set at no more than 60 feet. The radiuses were key components to maintain the industry standard of 75 percent capacity for tandem lifts. The Doris came in at right around 100,000 pounds [45 metric tons] total.” 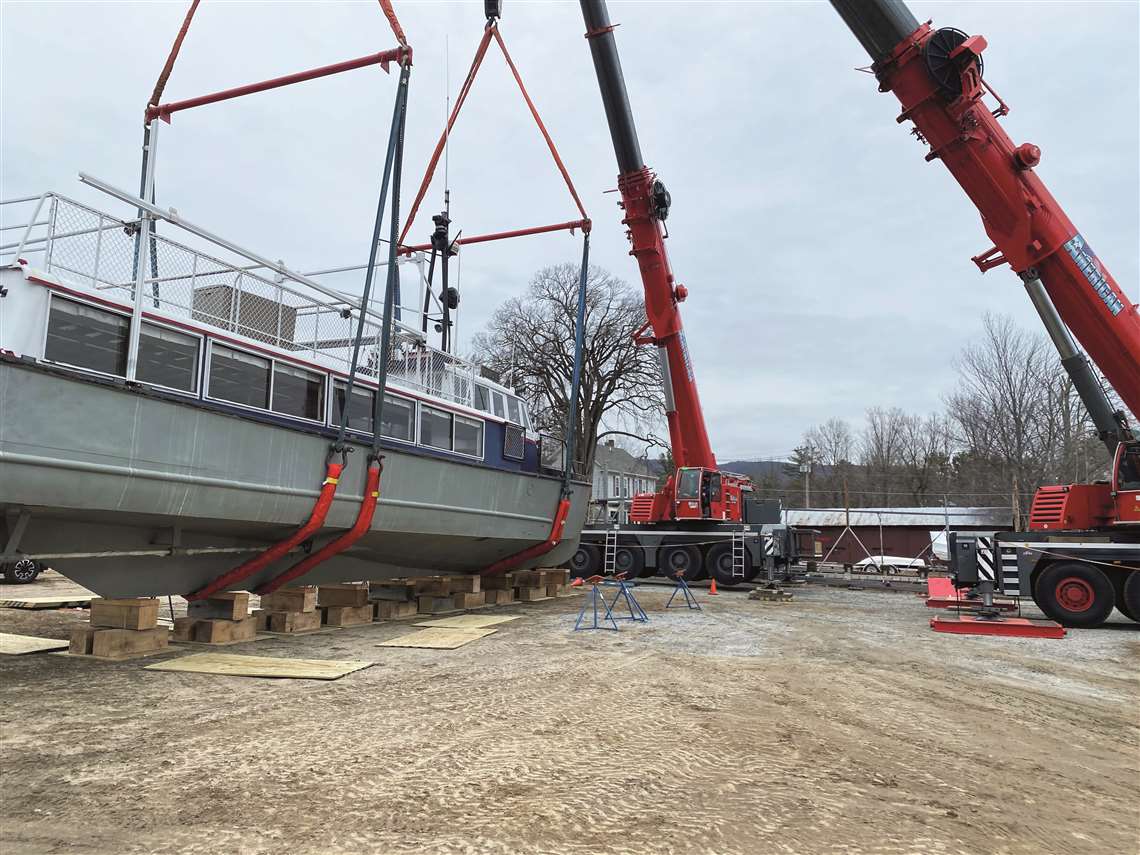 The vessel known as MV Doris E was built in 1962 and historically carried mail and commuters from Lakeport to Weirs Beach in New Hampshire.

“The biggest challenge, as it usually is the case in this industry, is the layout of the cranes to maintain the capacities needed for the tandem lift,” added Lesniak. “The American Crane team drew this up in the office, came up with the plan on site for the layout, then we went over it with the operators prior to the mobilization. Once on site, everything went to plan, except a slight change in the LTM 1220 center pin location. We rolled this crane forward 6 feet to open up more of a window to thread the needle as the Doris passed between the two cranes. This last-minute change was crucial as space was very tight.” 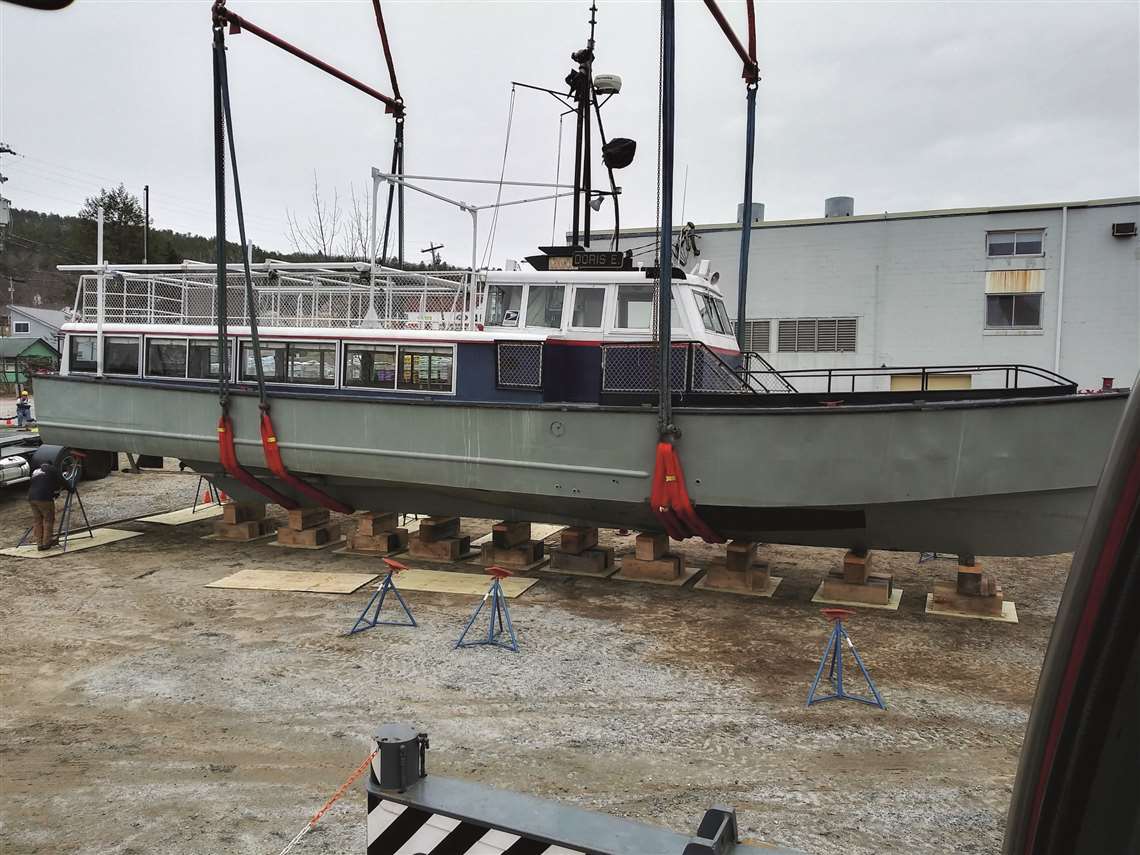 Despite a variety of alterations over the years, the Doris clocked in at nearly 100,000 pounds total.

“The unique aspect of this project was twofold,” said Lesniak.

It was an interesting lift for the company as the Doris is a well-known boat in the Lakes Region of New Hampshire. Her history of being altered, widened and lengthened over the years made it challenging to know exactly what weight the vessel was going to clock in at.

“Personally, I live in the Lakes region with my family, and we see the Doris on the lake every time we go out,” he concluded. “She is one of the tourist attractions (along with the Mount Washington and Sophie) that draw people to the lakes region for a tour of the beautiful Lake Winnipesaukee.”