Anatomy of a lift plan 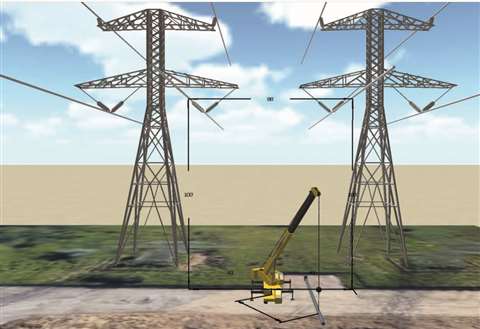 In these examples, simple 3D Lift Plan documentation enabled the crane rental companies to better communicate with the customer.

Practically speaking, whether you are communicating with customers, site owners, or vendors or using lift plans for internal documentation and planning, it’s important that you know what the other party needs and expects when they say they want to see a Lift Plan.

There was a time when it was acceptable to hand draw crane placement on a plot plan or to cut and paste a drawing of a crane over a Google Earth image. But increasingly, these types of lift plans are rejected by contractors or project owners. Customers like the Army Corps of Engineers, a national developer of shopping centers, and a commercial gas services company, now require software-generated lift plans for bidding on and performing work. They see risk mitigation benefits of lift planning software tools. Instead, building the jobsite in 3D over a plot plan or Google Earth image really helps communicate to the customer.

Generally, lift plans can be categorized as:

These may be generated using different tools, such as AutoCAD or 3D software. They include whole documents of information on the load, rigging and crane selection. Soil samples and ground bearing pressure data, ingress and egress plans for the crane, obstructions and calculations for the most crucial lifts will also factor into an Engineered Lift Plan.

However, what sets this type of plan apart is that it is signed off on by an engineer. Depending on the job requirements, it may not be necessary for the engineer to be credentialed as a PE (Professional Engineer). If a PE stamp is required, usually the individual or firm will want to be involved in the lift planning from the beginning. 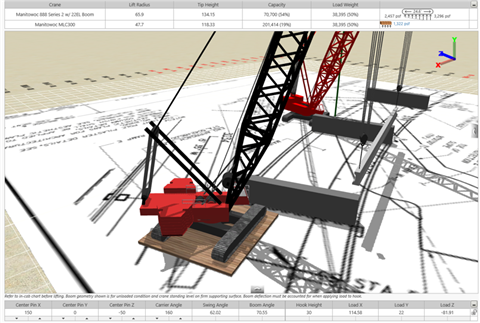 Communication Lift Plans can stand alone or be included as part of an Engineered Lift Plan.

Communication Lift Plans are a visual representation of the crane setup area and crane configuration, the travel path of the load, rigging and ground-bearing pressures. This document may only contain enough detail that is appropriate for communicating with non-crane personnel, such as the customer or other contractors working on the site.

For example, during the bidding process for the construction of a monorail system at a boiler plant, the proposed lifting method was to use two tower cranes. However, Sterling Boiler & Mechanical, a mechanical contractor based in Indiana, utilized 3D Lift Plan to create a Communication Lift Plan that demonstrated a more cost-effective alternative.

“By using a Grove GMK7550 with luffing jib, I was able to reduce the crane rental schedule to two months, compared to the 12-month rental required for using the tower cranes,” said Steve Phillips, business development manager.

Communication Lift Plans can also include greater detail for internal communication with project managers, safety directors, as well as field personnel such as riggers and crane operators.

These types of plan automatically monitor the crane’s capacity as there are changes to boom angle, jib offset, load location, crane location or lift radius. It is possible to simulate the entire lift while monitoring capacity, load charts and ground bearing pressures. Snapshots through the load’s travel path, printouts of the full plan, or URL links to crucial information are convenient ways to communicate important information to the people who need it.

Rigging plans include a drawing of the load and rigging with information about the lifting point or points, center of gravity, sling angles and tensions, sizes and capacities of rigging gear, weights and load chart deductions. It also includes rigging list, like a grocery list of supplies to be used. 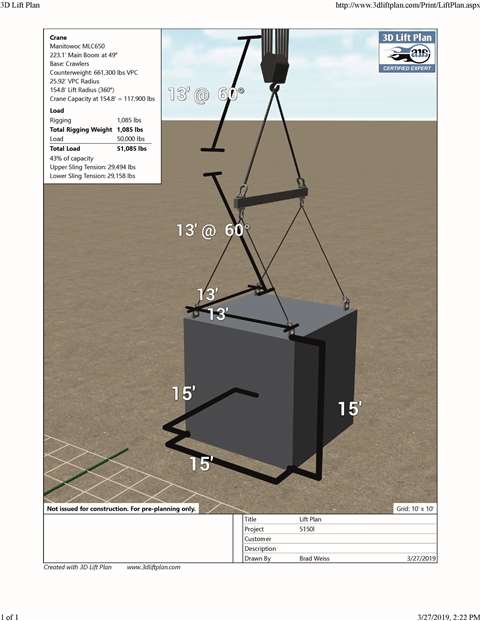 Rigging Plans are usually included as part of an Engineered Lift Plan or Communication Lift Plan. Crane rental companies will frequently develop a Rigging Plan to present a scope of work to a rigging supplier, in order to request a proposal for the rental or purchase of slings, hardware and special rigging gear. It is also used to communicate with engineers, and of course, riggers and crane operators.

In its simplest form, Lift Plan Worksheets are a summary of your lift plan. These include checklists of the essential data of the lift, including the crane, load and rigging specifications; weight deductions and crane capacities, and pre-lift safety checklists. These might only include a hand-sketched visual representation of the crane setup and rigging. And they may include copies of crane operator certifications and qualifications and equipment inspection records.

A word of warning: Be careful about calling these checklists ‘Critical Lift Worksheets’ unless it meets the criteria set out in ASME P30.1.