Another fine year: a good year for large rental yards 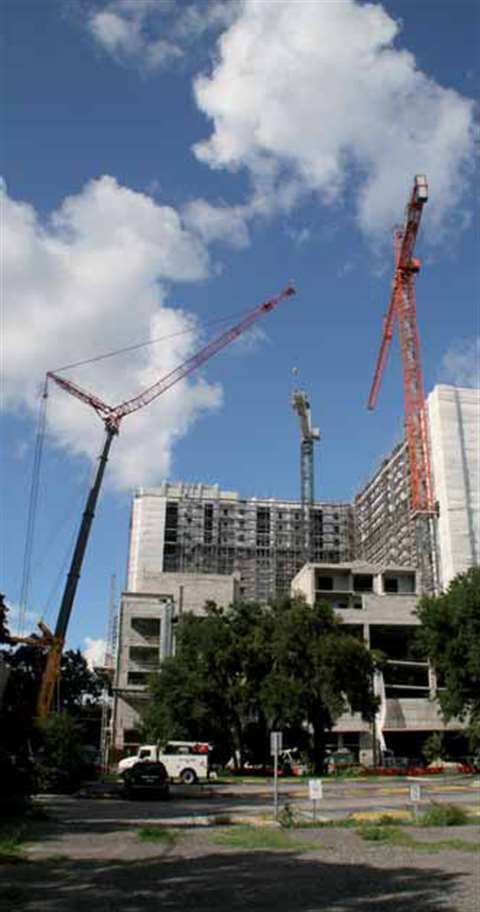 Larger rental yards continue on a path of prosperity with good utilization and further investments in equipment. John Wyatt reports

Last year, ACT reported that there was more work than cranes for the rental businesses with larger tonnage cranes in their fleets. This year, activity appears the same for the larger rental yards. Currently, the consensus is that all-terrain cranes and crawlers can't come in fast enough and companies are anxious to get the next machine.

“Our business is basically growing if not bursting at the seams,” says Ryan Burton, general manager of Eagle West Tower Cranes.

The Abbotsford, BC crane rental company rents, sells and services self-erecting tower cranes, city cranes and tower cranes, as well as crane accessories and generators. Eagle West Tower Cranes, one of the three companies under the Eagle West umbrella, has 45 rental cranes and 25 customer cranes that have been sold and maintained on a permanent basis. Currently, its fleet is on a yearly average of 80 to 85% utilization, which the company deems to be very good.

According Burton, rental rates are “fair relative to investment and are about 5% higher than one year ago.” In describing demand, Burton says approximately 75% of the year, the company struggles to keep up with work. For the three months of December, January and February, Burton says they wish for more business.

What machines are most in demand? Burton says cranes that have a 40 meter or greater jib length through 45 meters (147 foot, 8 inches) are in strong demand. The trend in the industry is to produce stronger, taller cranes with a longer reach.

Eagle West plans on ordering a minimum of eight rental fleet cranes this year as well as four to six replacement cranes. So, in essence the company is both updating and expanding its fleet, Burton says.

Like any other customer, Eagle West knows the concept of “hurry up and wait,” as most manufacturers struggle with backlogs. “Most manufacturers are backed up, it doesn't matter who you talk to,” he says. “While we're waiting for our German cranes, we're getting very strong production cycles from our supplier San Marco Cranes, in Italy, with each order being filled in 90 to 100 days, plus freight time.”

Crane Rental Corp. of Florida is at 90% utilization of its fleet. The company, between two locations in Davenport and Orlando, is growing. The Orlando location is adding a second floor onto its existing offce space, adding another 18,000 square feet, and the company plans on a 50,000 square foot addition in Davenport.

According to Crane Rental Corp. President Alan Ashlock, the company has a piece of each pie: 50% industrial; 40% commercial/public buildings, and 5% residential. The company has plenty of gear to service central Florida with 100 cranes that range from 15 to 825 ton capacity, and now has two Manitowoc 18000 crawler cranes.

In regards to rental rates, Ashlock reports rates for some equipment are down. “Hydraulics would be lower than 12 months ago; crawlers are higher; tower cranes lower,” he says, adding the work load has softened.

Large crawler cranes are still in high demand because of the large amount of industrial work underway in the state and beyond, as far as Arizona and everything in between, Ashlock says.

Are crawler cranes still in high demand? Ashlock answers yes. The company is also awaiting the arrival of its 80 ton rough terrain Grove crane 880 and 110 ton Grove TMS9000 hydraulic truck crane. And it doesn't stop there as the company has placed “several” orders for Link-Belt's LS298 230 ton crawler cranes, and expects the delivery of two before the end of the year.

“There are good rates in Pittsburgh and Houston. Georgia and Florida is on the average basis,” says Ferchak, reporting that rental rates in the Sunshine State are lower than 12 months ago. He says large hydraulics and large crawlers have been in highest demand for all locations.

Ohio-based company General Crane began in 1988 and as a rental house and “does a little bit of everything,” says President Dan Manos. “Our scope is truss work to the high power plants,” he says.

Right now the company has 18 cranes that service the Cleveland area and beyond, ranging from boom trucks through 200 ton capacity all terrain cranes.

“I'd say we're running 65% utilization,” Manos says. He adds that rates are slightly up from one year ago because when operators get a raise every May, the rates go up.

“In spite of the bad weather [as of early March] we can't keep up... with the high demand in the rough terrain crane and crawler crane market,” he says. Yet Manos knows that it's not just North America that needs machines – it's everywhere.

Ken Day, vice president of marketing with Ness Cranes of Seattle, says business is good at 75 to 80% utilization. The company has about 40 machines in its fleet and has a sister company, Campbell Cranes, located in Portland, OR.

“We consider our fleets dynamic in the sense that there is a constant push to add newer machines” says Day. The company's range consists of 14 ton boom trucks to 550 ton capacity hydraulic booms. In the lattice booms class, Ness highest capacity crane can lift 308 tons.

The level of activity was better than it was 12 months ago for Ness, Day says. The company continues to invest, awaiting its new GMK 5275 that was expected to be delivered in April.

“Most of our little three-legged stool we sit on is general building, mechanical and industrial. It actually seems to be pretty well balanced,” says Day.

John Skaff, vice president of sales for Nixon-Egli, says the crane business has been very active. In fact, he reports the company has had record years for the last three years in a row, not only revenues but profits as well.

“We have not had a decrease in the demand for cranes yet this year,” says Skaff. “But we have had a decrease in our paving products and compaction products. Road building is less in demand this year and I think that has to do with the subprime crisis and the lack of housing and new infrastructure being built.”

He does say that global demand has “probably taken a toll on the availability of crawlers for us” but as far as hydraulic truck cranes, the company is one of the top five sales volume distributors for Link-Belt cranes over the last few years, he says.

“I think the industrial market for hydraulic truck cranes has been very strong for us. We sell cranes to some of the taxi crane companies, and that's been a strong market for us,” says Skaff.

In short, the market in larger sized class cranes continues to prosper and utilization better than average. But how long will this last? Follow the trend in earthmoving and road construction, and one may find demand in the future is not perpetual.