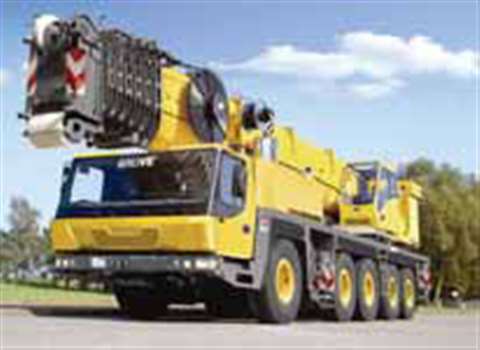 This is the year for Intermat, which means that Paris is the destination for thousands of construction industry professionals interested to learn about new and existing products and services that are or will be available. Around 100 companies in the crane, lifting, transportation and related services sector will have booths and equipment displays at the show held at the Paris-Nord Villepinte Exhibition Centre April 24-29.

With the construction sector performing strong in most countries around the world, Intermat organizers and exhibitors expect the mood of the show to be upbeat, if not jubilant. Organizers forecast this could be the largest Intermat ever, both in terms of attendees and exhibitors. The exhibition center encompasses an area approaching 4 million square feet of indoor and outdoor space. This year's Intermat will be quite a contrast from Intermat 2003, when the construction economy was stagnant and France was dealing with a strike among transportation workers.

A host of North American crane manufacturers and companies that sell cranes and related products in North America will show new and recently introduced products in a variety of categories. Manitowoc Crane Group plans its largest ever Intermat showing, with 11 products on display including Grove mobiles, a Manitowoc crawler, and Potain tower cranes. Seven of the machines displayed are new or are making their first appearance at a trade show in Europe. Manitowoc Crane Care and CraneCredit, MCG's customer service and financing business units, will also be on hand.

Among the new products MCG will show in Paris are the Grove GMK5220 all-terrain crane (GMK5275 in the US) and the Grove GMK4080-1 all-terrain (GMK4100 in the US). In addition, Manitowoc will display the Model 16000 crawler crane, the first time Manitowoc has exhibited it outside the US. MCG will also display the GMK2035E, manufactured at the company's new facility in Niella Tanaro, Italy and is a version of the the 35 ton GMK2035. From Potain, new cranes on display will include the Igo 11 and Igo 22 self erectors. Potain is also showing two tower cranes from its top slewing line, including the MD 238A from the Topkit MD range and the MDT 98 from the MDT City range.

Terex will display a wide range of construction equipment at Intermat, including cranes, new excavators, wheel loaders and aerial work platforms. Terex Cranes will display six mobile cranes and two tower cranes, including the AC 70 City and the AC 55-1. Two Terex Comedil tower cranes will be displayed as well, the CTT 121-5 and the CBR 24-H. Terex Bendini's RC 45 rough terrain crane, will round out Terex Cranes' lifting equipment at the show.

Liebherr-Werk Nenzing plans to show the new 50 ton-class HS 835 HD duty cycle machine with a 270 kW diesel engine, 56 feet of main boom and a 2.75 cubic yard dragline bucket. The HS 835 HD is an upgrade of the HS 833 HD and is available with a light boom for lifting and a heavy boom for duty cycle applications.

New in the Liebherr LTM series of wheeled telescopic mobile cranes are the 40 tonne (44 ton) capacity LTM 1040-2.1 and the five-axle, 160 tonne (176 ton) capacity LTM 1160-5.1. Also making its Liebherr debut is a new modular range of flat top tower cranes. The 13 new models of the EC-B series are rated between 50 and 280 tonne-metres. Maximum loads are 5.5 to 13 tons and jib lengths are up to 246 feet. The tower heads have integral hoisting and slewing gear, slew ring support, electrical cabinet and operator cabin. On the 71 EC-B 5, the pre-assembled head is 8 feet high and weighs 3.6 tons, which means it can be transported upright and installed in one piece.

Of the four lattice boom crawler cranes being displayed at Intermat by Kobelco Europe, the focus will be on the 250 tonne (275 ton) capacity CKE2500-2. The new model is a successor to what the manufacturer claims is the world's best selling 250 tonne crane, the CKE2500 (more than 220 units sold in the last five years). All of the cranes on show are specifically designed for the European market.

The latest from Hetronic, the maker of radio remote control systems, can be seen in the Ascorel booth. The all-digital BMS-2 can have up to eight proportional and 12 on/off outputs. The outputs are programmable from a laptop computer for a range of applications.

After setting records in sales volume in 2005, Ritchie Bros. will be at Intermat to promote the launch of SVV Ritchie Bros France SAS, the company's new French operation. Details of the first unreserved auction to be held in France will be announced during or after the show.

Cummins will show off its engines designed to meet Tier 3 and Stage IIIA emissions regulations. Cummins will display the new seven-model generation of Quantum engines.