With their ability to reach up, out, over and even below, articulating cranes play an important role in the realm of lifting. While the capacities of these cranes may be on the smallish side, they are the preferred crane for material handling, from pallets of tile, siding and the like to prefabricated concrete components. 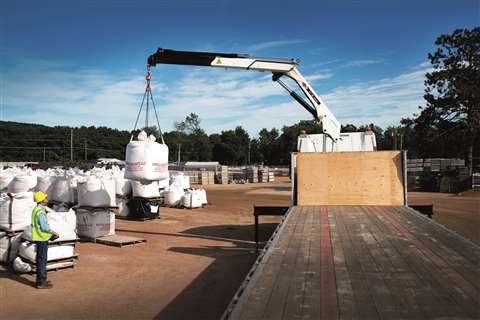 A variety of industries have adopted knuckleboom cranes as the lifting solution of choice. These industries include construction, mining, state department of transportation organizations and marine industries, to name a few.

Features of articulating cranes include radio remote control, overload and operator protection and manual and hydraulic swing up stabilizer legs. They can be mounted on trucks or pedestals. ACT rounded up some recent projects taken on by various articulating cranes.

Baltimore hospital officials doubted whether a tower crane was the right lifting solution for an expansion project. When emergency helicopters arrived or departed, construction would temporarily stop and the crane would have to move. 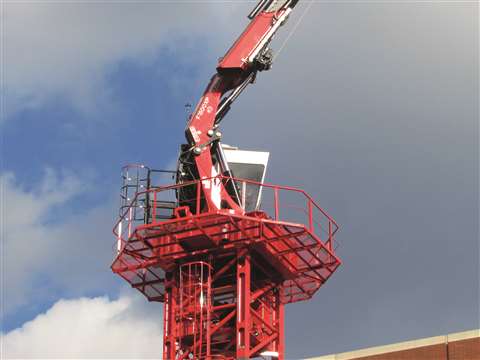 Hospital and construction officials also disliked the idea of placing a crane on an adjacent street, requiring traffic stoppages and slowdowns. More important, a street crane could also delay ambulance arrivals at the hospital’s ER.

Challenged to find the best method of lifting materials to several floors, the construction company turned to Baltimore-based Fascan International, the U.S. distributor of Fassi cranes.

Jeff Kline of Crane Specialists suggested that a Fascan knuckleboom would be right for the high-rise structure. Working with Fascan, the team decided to mount a heavy-duty Fassi F1500XP on a crane mast already in place. The F1500XP offered a maximum lift of 66,100 pounds. Its maximum hook height is 134 feet.

The Fassi knuckleboom reached the needed height for all floors and rotated 360 degrees. It also continued to operate in winds up to 45 mph, significantly higher than other cranes might have withstood.

A warning call from authorities would prompt retraction of the crane to neutral position in seven minutes – seven feet beneath the helipad. Lifting would resume minutes after the helicopter landed or departed.

The Fassi crane eliminated helicopter safety issues and a traffic-blocking street imprint while helping complete the project ahead of schedule.

A Palfinger PK18002-EH articulating crane has turned highway sign and guardrail installations into a safer, more efficient project for a Runnion Equipment customer.

“The advantage really comes from the safety aspect,” said Brad Runnion, sales support manager, Runnion Equipment. “There are some operators in the world that will short jack their outriggers without stability control monitoring. They will begin working, forget how the outriggers are configured and swing the crane over to the short-jacked side, then tip the crane over. With Palfinger’s (computer-guided) stability control, the crew can safely configure the outriggers and operate the crane exactly as it was designed to function.” 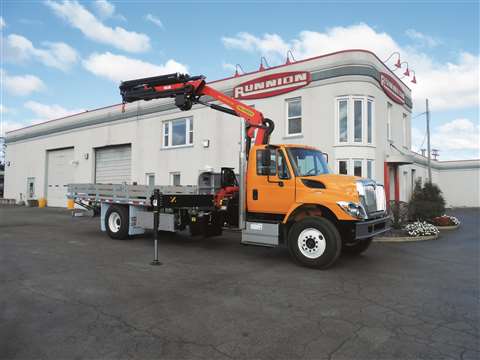 When the crane puts a large, green highway sign or guardrail into position, it’s a one-time-only placement. The Palfinger articulating crane’s performance also improves highway safety while limiting traveler inconvenience. Runnion speculated that, before this crane’s arrival at roadsides, “In order to fully deploy the outriggers, paying for a lane closure was necessary.” Runnion also pointed out that depending on crane size and desired payload, a knuckleboom can be installed on a non-CDL chassis.

The PK18002-EH has a lifting capacity of 13,440 pounds. Hook height has a maximum hydraulic reach of 55 feet, 9 inches. Runnion Equipment is based in Lyons, IL.

A 65-year-old maker of architectural concrete, terrazzo and metal architectural products has found a faithful ally in serving one of its oldest customers.

“We have two series of IMT knuckleboom cranes in our fleet – the IMT 12/86 and IMT 14/98,” said Todd Treu, a Wasau manager. “They allow us to unload at a customer’s location, delivering our products without damage.”

The truck-mounted cranes proved the best option for limiting delivery to a one-step process. “It’s a lot cleaner delivery if we can put the product on one of our trucks and take it right to the customer and have our cranes set it on the ground,” he said.

The two IMT cranes have 20-foot horizontal reach and lift capacity up to 97,000 foot-pounds. The hexagonal boom’s extended reach have been especially reliable delivering heavy items such as a textured concrete trash can, table or bench to a McDonald’s restaurant or a giant, red concrete ball that identifies a Target store.

Treu said IMT articulating cranes have a strong history of safely delivering precast concrete paving products, terrazzo products and site furnishings. “Thanks to these cranes, it’s amazing how much stuff we have put out there on the street,” he said.